An Alarming Report:  The Jewish Week of New York reports that 92 percent of American Jews support the BDS movement.


A new and alarming AJC poll shows that 92 percent of American Jews support the BDS movement, sending worried communal officials into a tizzy.

BDS stands for Boycott, Divestment and Sanctions and represents a serious threat to the State of Israel.

Prof. Steven M. Cohen, though, urged Jewish leaders not to panic, pointing out that most of those polled believed that BDS was a men’s underwear company, and thought they were supporting movement within the briefs.

“This reveals the level of Mideast awareness within American Jewry,” said Cohen, who pledged to launch a detailed study on the relationship between U.S. Jews and their undergarments, with an emphasis on the attitudes of young Jews in their 20s and 30s who, Cohen fears, are becoming more distant from their skivvies.


Be Happy!!  It's Adar!!
Once Adar begins, our joy increases!

Abq Jew wishes to apologize, but not entirely sincerely, to anyone who was taken in by the above article, which originally appeared in last year's annual Purim Spoof issue of The Jewish Week.

UNM Students for Justice in Palestine is promoting Israel Apartheid Week.  But they don't stand a chance against us - not during Adar!  Really, UNM SJP - you should check your Hebrew Calendar next time!

OK - if you' really concerned about IAW @ UNM, Tablet Magazine has published an article, Winning the War, that outlines some practical steps that the Abq Jewish community can take to counter the hatred.  But in the meantime - it's Adar! 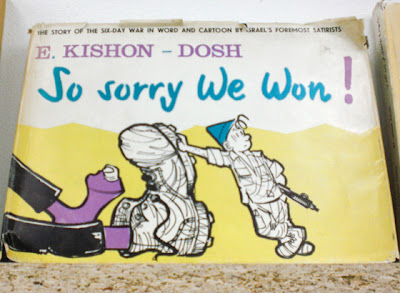 Remember when this book came out - shortly after the Six-Day War?  (Yes, it helps if you're of a certain age.)  Abq Jew lost his copy many years ago (but is willing to buy yours!), and considers So Sorry We Won one of the happiest, truest books ever.