Israel Will Not Attack Iran Until After May 29

Netanyahu Promises:  In a statement of major political and military importance, Israel's Prime Minister Benjamin Netanyahu has pledged not to launch an attack against Iran's nuclear facilities until after May 29.

The reason: Madonna, the Queen of Pop, is scheduled to perform in Tel Aviv on that date.

Yet not entirely false! The Israel newspaper Ha'Aretz reports:

New Facebook group asks Prime Minister to postpone any plans to a strike of Iran's nuclear facilities until after the Queen of Pop's planned May 29 visit. 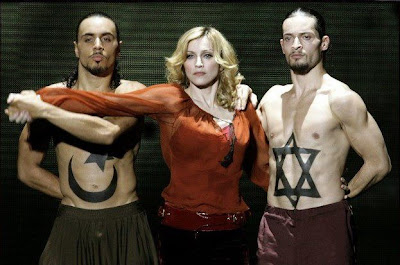 Recent verbal exchanges and remarks concerning alleged Israeli plans to attack Iran's nuclear program later this year has Israelis scared, and not for the obvious reasons.

In a newly launched Facebook page, Israeli fans of U.S. pop megastar Madonna are pleading [with] Prime Minister Benjamin Netanyahu to hold off any such plans to strike Iran until the Queen of Pop's planned show in Tel Aviv on May 29.

The group, simply and directly enough, is named: "Bibi don't start a war with Iran until after Madonna's show on May 29."


Be Happy!!  It's Adar!!
Once Adar begins, our joy increases!

Purim is approaching, and you can make this stuff up.  But this is a true story - Abq Jew read it in the New Jersey Jewish News!  Except for the part where Bibi actually promised ....