If A Seagull Flies Over the Sea:  Were you there when Keynote Speaker Michael Wex gave the Keynote Address at A Taste of Honey 2012?

Abq Jew was among the crowd - a really nice-sized crowd - and heard almost every word.  (He's sure he missed a few words 'cause he was laughing so hard.)

Much of what Mr Wex said cannot be repeated - you really had to be there.

And some of what Mr Wex said cannot be repeated -  Abq Jew's blog is intended for a family audience (sometimes).

But Abq Jew will tell you this: He will never reach to touch-kiss a mezuzah again without thinking of Michael Wex's definition of the term.

For those of you who were not there - you missed a good one.  Not only was Mr Wex right on target - all the mini-course instructors were, too.

After presenting his own Tales of Rabbi Nachman, Abq Jew attended Janet Gaines's excellent presentation, The Heart of Ruth.  Which meant he missed Shlomo Karni's 'The Days To Come' and the Messiah in Judaism; Naomi Sandweiss's Jewish Traditions under the Italian Sun; and many, many more.

Abq Jew wishes to thank the Albuquerque JCC's Phyllis Wolf and Robyn Weiner, and the entire ATOH 2012 Committee (of which he was a very small part), for producing this year's A Taste of Honey.  How come we do this only once a year? 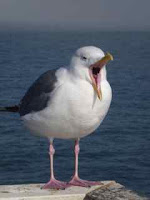 But Abq Jew will tell you this: He will never hear a bagel (or a seagull) say "Feh! Feh!" again without thinking of Michael Wex's story.

You really had to be there.