Talking Dust Bowl Blues:  Pete Seeger, may he live to 121 (he's 92 now), has always been one of Abq Jew's favorite musicians, philosophers, and political activists.  Despite the fact that Pete and Abq Jew don't seem to have the same opinions about almost anything, they do share a love for the long-necked 5-string banjo. 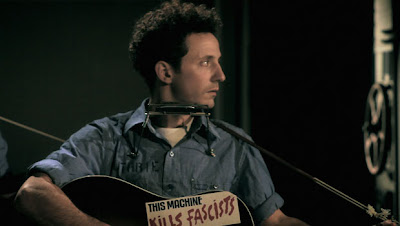 In fact, it was because of Pete Seeger (and his first of its kind instruction book, How To Play The 5-String Banjo) that Abq Jew began to play the banjo, way back in the 60s.  The 1960s.

Woody Guthrie was Pete's strongest influence.  A musical and political pioneer in his own right, Woody influenced - and continues to influence - generations of folk musicians and creative thinkers.

One of those creative thinkers - who also happens to be both a talented musician and the son of Abq Jew's good friend Julian Tepper of Placitas - is Rob Tepper.

Rob has created Dust Bowl Productions and produced a short film, Been Good To Know Yuh (from the title of one of Woody's best known songs).  Synopsis:


Plagued by a degenerative neurological disease and facing his own mortality, America’s Father of Folk Music, Woody Guthrie, relives a handful of life shaping occurrences while waiting for his closest friend, Cisco Houston, to show up for one last drink.

Rob Tepper is an alumnus of Santa Clara University (CA; not the pueblo), whose Santa Clara Magazine recently published a glowing article about his achievements.

In the article, there's a photo of a few well-known singers that shows Rob Tepper standing next to Pete Seeger.  Someone asked Pete if Rob reminded him of Woody at all.  Pete's characteristically terse reply: "Rob is Woody."

Anyhow, Julian Tepper enjoys kvelling about Rob.  And why shouldn't he?  Here's a piece from a recent JT Facebook posting:


When he was 16, I drove Rob from Bethesda, MD to Indianapolis (a town whose racist school system I had desegregated in the late 60s while with the US Justice Department's Civil Rights Division, so that he could play with his team for the Under-17 National Soccer Championship. On the day that we arrived, we drove around some of Indianapolis's neighborhoods and the schools, including Oscar Robertson's Crispus Attucks High School.

I have seen Rob play the guitar (self-taught) and soccer and football and, well, he is uniquely wonderful at all of them.The route of his journey to do all that he wanted to and could do, has been long, sometimes torturous and, most often, delightful. I don't know where in five years Rob will be along that route, but right now he is on his way to greatness. He is, for the most part, standing right next to Woody in the midst of a land that Woody called his own. It is important, I believe, to understand that Rob does not imitate Woody. Rob is a compelling actor who has invaded and mastered Woody's spirit.

Here's the music video of Woody Guthrie, aka Rob Tepper:


Think Rob does a good Woody Guthrie impression?  So does No Depression: The Roots Music Authority.  Rob has also produced a one-man show, When The Curfew Blows, describing Woody's struggles - with Huntington's Disease and other hard times.

Why does he do this?  Rob says:


Woody’s fight, his stubbornness, and the genius of his music strike me deeply.
His story needs to be told. His songs need to be sung.

One more good reason to subscribe to ABQ Jew