Klezmer! Nahalat Shalom! This Weekend!  Yes, Abq Jew has mentioned this before. But once again, (maybe) for the last time (until 2013): 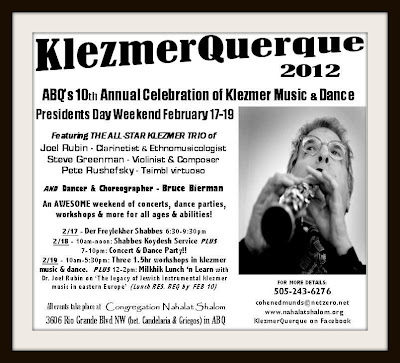 Here is the schedule:

Here are the guest artists: 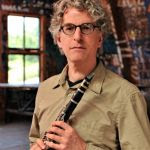 Joel Rubin has long been considered by many to be the leading performer of Jewish instrumental klezmer music in the world today, earning accolades from sources as diverse as klezmer giants Dave Tarras and Max Epstein, international clarinet soloist Richard Stoltzman, avant garde composer John Zorn, and Nobel Prize Laureate and poet Roald Hoffmann. He studied with Stoltzman and Kalmen Opperman, attended the California Institute of the Arts and received a BFA from the State University of New York at Purchase.

Rubin holds a Ph.D. in ethnomusicology from City University (London) for his pioneering work on improvisation and ornamentation in klezmer clarinet music. He is currently Assistant Professor and Director of Music Performance at the University of Virginia’s McIntire Department of Music. He has concertized throughout Europe, North America and Asia since the 1980s. In addition to appearances with traditional performers such as the Epstein Brothers, Moshe “Moussa” Berlin, Seymour Rexsite and Miriam Kressyn, Leon Schwartz, Sid Beckerman, Pete Sokolow, Danny Rubinstein, Ben Bazyler, and Leopold Kozlowski, Rubin was the founder and clarinetist of some of the most internationally respected klezmer ensembles, including the pioneering revival group Brave Old World. Rubin’s albums Midnight Prayer (Traditional Crossroads), Beregovski’s Khasene (Beregovski’s Wedding), Bessarabian Symphony, Zeydes un Eyniklekh (Grandfathers and Grandsons) and Hungry Hearts are considered to be masterpieces of classical Eastern European and American Jewish music.

His music can be heard in several films, including the recent L’armée du crime (France, 2009), and the award-winning documentary portrait A Tickle in the Heart (Germany/Switz./USA 1996) about the Epstein Brothers Orchestra. 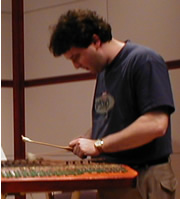 Pete Rushefsky is Executive Director of the Center for Traditional Music and Dance, a New York not-for-profit dedicated to preserving and nurturing the performing arts traditions of immigrant and ethnic communities. He is also a leading revivalist of the tsimbl (small Eastern European Jewish hammered dulcimer), one of a handful of young klezmer musicians to use field and archival research in recreating a performance style for the instrument.

Rushefsky performs and records with some of the leading performers of contemporary klezmer and Yiddish music, including violinists Alicia Svigals and Steven Greenman, flutist Adrianne Greenbaum, clarinetist Michael Winograd, and vocalist Rebecca Kaplan. A popular instructor at KlezKamp and KlezKanada who has performed across North America and Europe, Pete is also the author of a pioneering instructional book on adapting the American 5-string banjo for klezmer.  He is a well-known lecturer on klezmer and other traditional musics and has a number of published articles to his credit.

Steven Greenman is recognized internationally as one of the finest practitioners, composers and teachers of traditional East European Jewish klezmer violin music in the world today.  He has self-produced two landmark recordings documenting his original Jewish and klezmer compositions with Stempenyu’s Dream (2004) and Stempenyu’s Neshome (2010), the latter containing his original Jewish spiritual melodies.

In addition to klezmer music Steven is an accomplished performer of Hungarian nota, Romanian lautari music and urban East European Gypsy music and is a performer with the ensemble Harmonia.

As a concert performer Steven has been a guest soloist with the Cleveland Pops Orchestra, the Canton Symphony and the Akron Symphony performing his own arrangements of traditional East European Gypsy violin music and klezmer music. 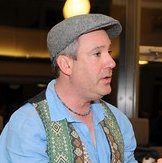 Bruce Bierman:  "Yiddish dance? What's that?" That's what most people ask me when I tell them I lead Yiddish dance for workshops, simchas and festivals around the Bay Area.

Still, it's Yiddish dance that makes me and others laugh for some reason. No one has to worry about getting any steps "right." The dances are all improvised on the spot with a few basic steps — just follow the leader! You dance with community, but you bring your unique self into the circle to shayne. If there is a meaning behind Yiddish dance, that is it.

So with great pleasure, I am happy to announce that Yiddish dance is back and looking marvelous — thanks in part to the tireless fieldwork of Yiddish cultural historians such as Michael Alpert and Zev Feldman and to my own master teachers, Steve Weintruab, Deborah Strauss, Felix Fibich and Julie Egger. Their burning passion to pass on Yiddish dance and culture to the next generation is a gift of spirit, spunk and joy that can never be extinguished.

I hope to see you all out on the dance floor to experience this new ... er ... old dance come alive again. 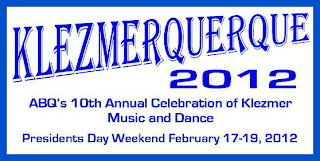