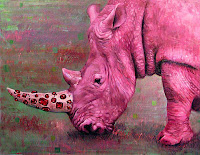 In addition to the annual KlezmerQuerque, the Duke City also has GlobalQuerque.

In addition to The Rebbe's Orkestra, we also have Zoltan Orkestar - in fact, the two groups shared a stage at the Kimo Theatre not too long ago.

And there's Gergedan (Turkish for rhinoceros), a creative entity of unknown origin, derivation, or any form of address that seems to have produced a series of artistically stunning music videos.

And apparently without, Abq Jew must note, consulting the musical artists involved. Zoltan Orkestar says of this Gergedan video, of their song Circus of Pain:

Wow cool, I just found this on youtube, its a montage someone in Italy did to one of our songs, pretty cool, I'm always flattered by our global following that pops up randomly.

Abq Jew concurs:  Wow, cool.  Abq Jew just found this on Facebook.  It is indeed a montage that Gergedan, whoever he or she or it or they may be, did to Circus of Pain, one of Zoltan Orkestar's songs.


Do you know Gergedan?  Inquiring minds (and minds like Abq Jew's) want to know!
In the meantime, visit GergedanFilKedi's YouTube channel!