The City of Los Angeles:  Well, it's Monday.  A Taste of Honey and KlezmerQuerque have come and gone ... so it's time for Abq Jew to get back to what may be called normal life in the Duke City.

But before we do ... ATOH and KlezmerQuerque brought us many visitors from in-state and from out-of-state, and Abq Jew wishes to recognize those who came from another state entirely - California.  And, in particular, those who came from the wonderland known as El Pueblo de la Reina de Los Angeles (The Town of the Queen of the Angels).  Or, as we call it, L.A.

Just the name "L.A." brings wonderful memories of warm, sunny days at the beach, the water cold enough to freeze your ... self, and the sand whipping and getting into pores and crevices you didn't even know you had. 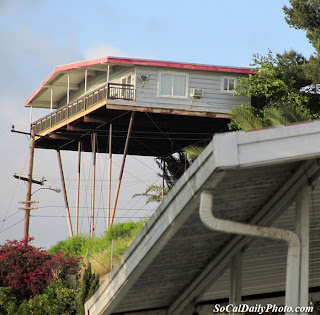 But mostly, Abq Jew remembers driving around the better parts of L.A. and seeing houses built like the one above.

And second - how do the occupants of this house (and the house does have occupants) sleep at night?  It is said that there are only two seasons in Southern California: summer, when the houses are on fire; and winter (the "rainy season"), when the houses are sliding down the hillsides.  To which Abq Jew must add a third: earthquake season.  It's always earthquake season in So Cal.

Third - is there a great L.A. song?  Abq Jew immediately thinks of The Streets of Bakersfield, My Darling Clementine (about Sacramento), Talk to Me of Mendocino, Mendocino, To Morro (Bay), and, of course, I Left My Heart in San Francisco.  Is there something similar for the city where the Dodgers went bankrupt?

Abq Jew proudly informs his discerning readers that indeed, yes there is.  Actually, there's a zillion of them, of which The Mamas & The Papas' Twelve Thirty has always been a favorite.  But never mind that now.

First some background, courtesy of Wikipedia: 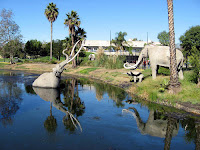 The La Brea Tar Pits (or Rancho La Brea Tar Pits) are a cluster of tar pits around which Hancock Park was formed, in the urban heart of Los Angeles. Asphaltum or tar (brea in Spanish) has seeped up from the ground in this area for tens of thousands of years. The tar is often covered with dust, leaves, or water. Over many centuries, animals that came became trapped in the tar, and were preserved as bones. The George C. Page Museum is dedicated to researching the tar pits and displaying specimens from the animals that died there. The La Brea Tar Pits are now a registered National Natural Landmark.

And with that - here is Dr Demento's version (amazingly, there are others) of the Felix Figueroa hit, "Pico and Sepulveda."  Named for one of L.A.'s best-known intersections, and with several subtle mentions of the La Brea Tar Pits.


Where does Abq Jew find this stuff?  How does he even know what to look for?