For a few months, some folks have been gathering for Shabbat evening, for Seudah Shlisheet on Shabbat afternoons, for Shabbat morning meditation before dispersing to our respective synagogues or temples. We have learned together and celebrated together.

And we'd like to let you know about it, because you're invited.

Being Jewish is becoming, for many of us, more than "just a religion"; it's becoming a way of life, a spiritual path we walk toward knowing God's Presence.  We're both

Remembering and Imagining: we want to live our tradition while creating a Jewish future with a progressive heart. We seek God's face on a path of Body and Mind, Heart and Soul, and we sing a lot--in prayer, around the Shabbat table, at Seudah Shlisheet, and just for the heck of it.

Meditation, passionate prayer, song, serious study, right-action, art, music, gardening, building things--all these are our tools as we reach for the radical aliveness that is The Immediate Presence of God in the world. 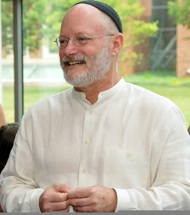 Rabbi Stephen:  Rabbi Stephen Landau is the Founding Director of KAVOD New Mexico. A long-time resident of Northern New Mexico, Rabbi Landau was ordained by Rabbi Arthur Green and the faculty of the Rabbinical School of Hebrew College in Boston. He is delighted to be back in New Mexico after 8 years in New England. As a trans-denominational rabbi, Rabbi Landau seeks the ikar, the Jewish essence, found in every stream of Judaism, and  honors them all.

Membership:  You can’t be a member here. There’s nothing to join. We’re not a temple or a congregation or a synagogue. We’re a growing number of Jews of all kinds who experience being Jewish as a spiritual path and a way of life. As something you live, not join. We understand that we have to do it ourselves, but we know we can’t do it alone. So we get together and we “do Jewish stuff” like study and learn and meditate and pray and eat and sing and help people out and teach each other and play and have fun.

But it’s a funny thing: since nobody’s noodging us to join up, we actually feel very generous and happy when we give. Every gift is really a contribution. And nobody’s keeping score. People simply contribute as much as they can, until it feels real.


Want to find out more?
Visit us at KavodNM.org!

DEAR COUSIN STEPHEN - ITS BEEN A VERY LONG TIME - SORRY ABOUT YOUR FATHER, HE WAS MY FAVORITE UNCLE.......... YOU LOOK JUST LIKE A LANDAU, UNCLE LOU REALLY. HOPE YOU'RE HAPPY - YOU CERTAINLY LOOK HAPPY. I THINK THE CONCEPT YOU ARE FOLLOWING IS INTERESTING AND REMINDS ME A LOT OF THE SIMILIARITY TO THE QUAKERS, WHICH IS A COMMUNITY RELIGION. IF YOU HAVE A MOMENT, WRITE ME A NOTE.
YOUR COUSIN SHELLEY, FROM NY NOW IN FLORIDA.