Best Song Ever by Boaz Sharabi:  Abq Jew is still on an Israel high after Celebrating Israel last night at Sandia Prep with Shira Greenberg, Bar Roggel, and the Keshet Dance Company - after fellafelling with his wife Perri Yellin the Artist at Sharon Levin's Gourmet to Go.

Thanks to the Jewish Federation, the Albuquerque JCC, New Mexico Arts, and the Albuquerque Sister City Foundation for making Keshet's "dancer exchange" and performances possible. 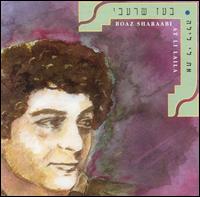 So, while Abq Jew is reminiscing about his Good Old Days (1970-71) in Eretz Israel:  Here, for your listening enjoyment, is one of the top pop songs of those years.

If you're thinking "it must be about Shabbat or Shalom, eucalyptus trees or olive branches, the Jordan River or Mt Scopus" - well, no.

The song is Pamela, and it's just a good old "she loved me then left me" song by Boaz Sharabi.  Worse - it's in English, sort of.  (Abq Jew does not remember ever hearing a Hebrew version.)

Do you remember this?

More about Boaz Sharabi from Wikipedia:


His career has spanned more than 40 years, and was at its height in the late 1980s. Most of his songs are acoustic rock, andalusian chords, soul music and oud type songs, blended with Israeli folk, Judeo-Yemenite and Pop overtones. He also sings classical music in Hebrew and is an international acclaimed pianist. He also recites the poems of Shalom Shabazi as part of his work on past albums.

Boaz Sharabi was born in Tel Aviv, Israel, and grew up in a family of artists. His brother Yoel Sharabi is a popular Hasidic and Yemenite entertainer for Jewish communities abroad, Baruch Sharabi was a choreographer tapdancer in Israel and Zion Sharabi a songwriter.