The latest issue of What's Nu, the JFSNM e-newsletter, reports: 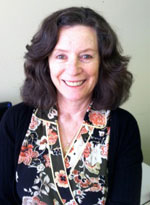 Born and raised in South Africa, Miryam finished high school in Washington DC. She came to New Mexico in 1975 as a young lawyer. After practicing law and mediation in Albuquerque she migrated north to live in an intentional spiritual community in northern New Mexico. Inspired by the eclectic spiritual practices she encountered there and by the teachings of Rabbi Zalman Schachter-Shalomi, Miryam eventually left NM to study at the Jewish Renewal Life Center in Philadelphia. She later became part of the management team at Elat Chayyim, the Jewish Retreat Center in upstate New York.

During her years at Elat Chayyim, Miryam entered a school of nondual healing, which led her to pursue chaplaincy studies. Her clinical training in chaplaincy took place at Sibley Memorial Hospital in Washington DC and Albert Einstein Medical Center in Philadelphia. Simultaneously, Miryam enrolled in the Rabbinic Seminary Program of Aleph: Alliance for Jewish Renewal and in 2009 she received ordination as a Rabbinic Pastor. That same year Miryam returned to Albuquerque where she has been working as the Bereavement Coordinator for VistaCare Hospice providing support, grief counseling and groups for hospice patients and their families.

Miryam leads a monthly group in the art of sacred Hebrew chanting in the style of Rabbi Shefa Gold. Her personal meditation and chanting practices provide the foundation and strength for her compassionate caring for others. She loves making art - particularly collage and altered books, freestyle dancing, and visiting with the sandhill cranes that winter over in the fields along the Rio Grande corridor. Miryam will expand the chaplaincy work currently done in Santa Fe hospitals, and plans to start a Santa Fe Grief and Loss Group.
Welcome, Chaplain Miryam!

Reminder!  In support of their many programs and services, JFSNM invites you to their annual FUNdraiser -