There's Whiskey in the Jar: Today we have Celtic Tenors, Celtic Thunder, Celtic Woman.  It is almost impossible for us now to recall a time when most things Celtic - even (or especially) in Old Ireland - were suppressed and repressed. 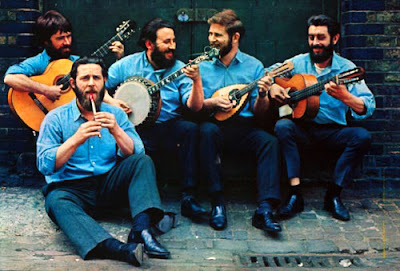 
Many groups can claim to have influenced the revival and flowering of Irish traditional music, but the Dubliners were, in so many ways, the first. This was the group that went to the country and resurrected dying songs ... and brought live music ... back to bars in Ireland at a time when it was nearly nonexistent.


Barney McKenna, whose racing, raucous and often lyrically haunting banjo playing helped propel the Irish folk band the Dubliners to fame, died on Thursday [April 5] at his home in Dublin. The last of the original members of the band, he was 72.

Michael Howard, a classical guitarist who was with Mr. McKenna when he died, told Irish and British newspapers that they were at the kitchen table when Mr. McKenna seemed to have “nodded off.”

“He passed away very peacefully sitting at his own breakfast table having a quiet cup of tea and a chat,” Mr. Howard said.

But in tribute to Barney McKenna z"l and all the Dubliners, here is Whiskey in the Jar as recorded by the Dubliners themselves.