A Continuum of Remembrance

Abq Jew was one of more than 200 people - of all ages and many ethnic groups - who overflowed the Museum's small space, along with Albuquerque Mayor Richard J Berry, Rio Rancho Mayor Thomas E Swisstack, and other dignitaries. 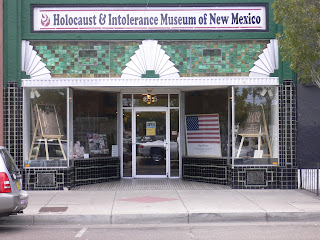 The Keynote Speaker was Renee Firestone, a survivor of the Auschwitz - Birkenau concentration camp and an international leader in social justice and Holocaust education. She is the founding lecturer for the Simon Wiesenthal Center's Educational Outreach Program in Los Angeles.

But this year's Yom HaShoah observance highlighted the importance and power of passing the memories of the final generation of Holocaust survivors to the next generation. And the most important people who attended the Ceremony were the Albuquerque and Rio Rancho high school students who had met and spoken at length with local Holocaust survivors - and who spoke to us, softly and loudly, prayerfully and passionately, about what they had learned.

Abq Jew was troubled by the entire experience.  Look at these kids - so young, so full of hope and ideas and optimism and conviction and life - why do they have to learn about mass murder on a personal yet universal scale that would be unimaginable except to those who lived through it?

Jacob's Bones is a blog from Israel, written by Beth Frank-Backman.  Abq Jew is too often too busy writing blogs to read others' - but he makes time for Jacob's Bones.

In a blog post entitled Holocaust, the Fourth Generation, Jacob's Bones brings to our attention a poem and video by Andrew Lustig entitled My Child, the Holocaust Denier.

Among the verses that strikes home:

I will patiently answer your “How?” and your eventual tearful “Why?”
You will bear witness, but I hope you resist
I hope that the world you live in is one that makes believing in the Shoah
more difficult than believing in God ….

Our high school students believe that respect, kindness, tolerance, compassion, and knowledge can mollify evil decrees.  Who are we to tell them no?

The Holocaust & Intolerance Museum of New Mexico, New Mexico Human Rights Projects,
and the Jewish Federation of New Mexico made this program possible.