Yeshivish As She Is Spoke 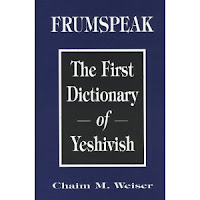 The teshuva: Rebbetzin RLZ is takeh speaking a toned-down, feminine version of Yeshivish.  She, after all, did not go to yeshiva - her husband did!

And what is Yeshivish?  Wikipedia answers:


Yeshivish (Yiddish: ישיבֿיש), refers to a sociolect of English spoken by yeshiva students and other Jews with a strong connection to the Orthodox yeshiva world.

Well, that clears it up!  Fortunately, the Forward's Philologos has published an article, How To Understand Yeshivish, that mamash does clear it up.

Here is one example of Yeshivish as she is spoke:


The lechatchila time for shacharis is neitz. B’dieved, if a person davened from amud hashachar and onwards he is yotzei. In a shas hadchak he may daven from amud hashachar and onwards lechatchila…. After chatzos it is assur to daven shacharis. One should wait till after mincha and then daven a tashlumin. The possibility for a tashlumin doesn’t exist for someone who was bemaizid.

This passage is entirely understandable to those who have had the privilege to spend time in yeshiva - who have sat and studied Talmud as if it were the most important thing in the world.

Here is the translation (thanks, Philologos!):

One should plan to say the morning prayer no earlier than sunrise. After the fact, if a person unknowingly prayed earlier, starting with the break of dawn, he is considered to have performed the commandment. If he has no choice [because he will not have time after sunrise], he may knowingly pray starting with the break of dawn…. After midday, saying the morning prayer is forbidden. One should compensate [for having missed it] by waiting for the afternoon prayer and repeating that a second time. Such compensation, however, is unacceptable in the case of someone who acted deliberately [in skipping the morning prayer].

For more examples of everyday Yeshivish, Abq Jew refers you to The Yeshiva World News.  Bet you didn't know that was out there, did you?

But here's a great video example from the kiruv organization Oorah.  Enjoy!