For Your Consideration: Do we really need new editions of the Passover Haggadah?  The traditional Hebrew and Aramaic text hasn't changed in ... well, a few years. 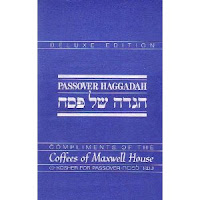 How did we get started, making new Haggadot all the time?

The original Haggadah - the one Moses used - was the one published by Maxwell House.  When Abq Jew was growing up, all the Children of Israel used this version.

But Abq Jew's parents, of blessed memory, were free radicals in the Israelite camp.

So Abq Jew's family used the New Revised Edition of the Passover Haggadah by Rabbi Nathan Goldberg.  The NRE was published by Ktav and first copyrighted in 1949 (by Asher Scharfstein); based on the "Haggadah by Rabbi Z Harry Gutstein"; and promoted as "A New English Translation and Instructions for the Seder."

Abq Jew and family still use the NRE at our Seders, and we've got the wine stains to prove it.  The NRE does indeed translate the traditional Hebrew and Aramaic text into what may euphemistically be called "New English."  Or Spanish, as in the case of Rabbi Jose the Galilean.

But all that is ancient history.  In addition to the zillions (that's a SWAG) of Haggadot published since Abq Jew was a lad, there are a couple of newer Haggadot that merit consideration.

The first one is entitled New American Haggadah - imagine that! - and is destined to become a blockbuster.  That's because it is edited by Jonathan Safran Foer (Extremely Loud and Incredibly Close), with a new translation by Nathan Englander (For the Relief of Unbearable Urges).

The publisher (Little, Brown and Company) proclaims that the New American Haggadah


is an elegantly designed work of art that will spark new insights into and conversation about this age-old work. A dazzlingly beautiful and inspiring book of prayer, argument, and contemplation, the NAH is both a meaningful gift and an arresting addition to a home library. Informed by the piercing intelligence and linguistic fluency that has marked Foer’s and Englander’s fiction, it is a reinvention of the old, a reinvigoration and revelation.

New York's 92nd Street Y concurs.  In fact, the Y will be offering A New Passover Experience on March 22.  The Y says


Join pre-eminent Jewish storytellers Jonathan Safran Foer and Nathan Englander to explore how they orchestrated a new way of experiencing and understanding one of our oldest, most sacred stories in their unique and absorbing New American Haggadah.

Abq Jew almost concurs, except for two points: L, B and Co (and / or Oded Ezer) - you couldn't have made the typeface 2 points larger? For the Second Printing (may it come speedily, in our days), Abq Jew reminds you that 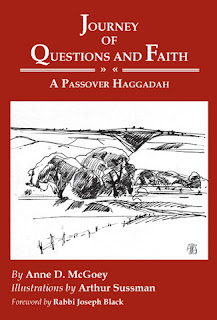 Which brings us to Journey of Questions and Faith: A Passover Haggadah.  JQF was written by Anne McGoey, a member of Albuquerque's Congregation Albert, with illustrations by CA's Arthur Sussman, of blessed memory.

And Abq Jew must also mention that there's a Foreword by Rabbi Joseph Black and a Backword (it's on the back cover; what else would you call it?) by Rabbi Paul J. Citrin - both former rabbis of Congregation Albert.

Whereas the New American Haggadah is big and bold, Journey of Questions and Faith is small and quiet.


For centuries Jewish people have celebrated their liberation from slavery in Egypt with Passover Seders. This contemporary version provides new meaning and insight to this tradition. Through poetic text, rich illustration, and song, Journey of Questions and Faith delivers this ancient story to Jewish or interfaith groups in understandable and relevant words.

Starting from the traditional usage of four cups that correspond to four promises, this Haggadah also links the four questions of How? What? Where? and When? to the four promises. The pattern of the past, present, and future, which the ancient rabbis had created, has been highlighted with special attention being placed on the future. New and thoughtful ways of interpreting the tradition are woven throughout this Haggadah.

Anne McGoey grew up in a family that was active in the Presbyterian church in the small community of Aztec, New Mexico.  She was introduced to Judaism in 1995 while studying for a masters degree in social work, and converted in 1998.  Ms McGoey states:


Having created a situation in which I was the only Jewish person in my family, I wanted a Haggadah that would be meaningful to both my family and my Jewish friends.  Unable to find a Haggadah that had everything I was looking for, I decided to create one.

Journey of Questions and Faith is the result of that effort.  Mostly in English, with some Hebrew and Aramaic sprinkled in, JQF is not for the tradition-bound.  But JQF is poetic and moving - a still, small voice that deserves a place at anyone's - everyone's - Seder.