They Shoot Horses, Don't They?

Perfect Design:  Among Abq Jew's dearly held beliefs is this:  That of all the perfectly designed creatures the Holy One, Blessed Be He, created, there are three whose design is even more than perfect: the greyhound; the horse; and the giraffe.

The greyhound and the horse, of course, are perfectly and elegantly designed - to run.  That is what they do, speedily, gracefully, seemingly effortlessly.  And the giraffe?  Perfectly designed to show us all that God, at least occasionally, has a sense of humor.  But not right now.

As a greyhound adopter and advocate, Abq Jew was certainly aware that they shoot greyhounds.  After a life of rough kennels, harsh treatment, poor food, and little medical care, those racing dogs who are not adopted out to a rescue organization are often euthanized - usually by gas or injection, but sometimes by the cheapest means available.

Abq Jew had thought that greyhounds were disposed of because they were cheaper to replace than to repair.  But horses?  Horses are expensive to acquire and expensive to maintain.  If greyhounds are a commodity, horses are an investment.  Surely, Abq Jew thought, horses receive better treatment than greyhounds.


Instead, say the authors,


The new economics of horse racing are making an always-dangerous game even more so, as lax oversight puts animal and rider at risk.

Do you find the picture above hard to look at?  Abq Jew did.  The article is accompanied by two videos.  Abq Jew was not able to view either video start-to-finish.

Abq Jew is particularly upset that much of Mangled Horses, Maimed Jockeys deals with the business of horse racing as practiced right here, in the Land of Enchantment.

Nineteen seconds later, under a brilliant blue sky, a national champion jockey named Jacky Martin lay sprawled in the furrowed dirt just past the finish line, paralyzed, his neck broken in three places. On the ground next to him, his frightened horse, leg broken and chest heaving, was minutes away from being euthanized on the track.

Judaism stands firmly for the ethical treatment of animals.  In her article in My Jewish Learning, Rabbi Jill Jacobs makes it clear that "the concept of Tzaar Baalei Hayim demands that we take animal suffering seriously."


Beyond simply prohibiting cruelty to animals, Jewish tradition associates care for animals with righteousness. Within the Torah, the commandment to send a mother bird away before taking eggs or chicks from her nest is one of the few commandments that promises long life to those who fulfill it. The book of Proverbs comments that, "A righteous person knows the needs of his beast, but the compassion of the wicked is cruelty."

The Times analyzed racing records from 2009 through 2011, and discovered that "during those three years the rate of incidents for horses in the United States was 5.2 per 1,000 starts."  And here in New Mexico?


According to the analysis, five of the six tracks with the highest incident rates last year were in New Mexico. All are casino tracks, commonly called “racinos.” Ruidoso, where Jacky Martin was injured, topped the list in 2011 with 14.1 incidents per 1,000 starts.

Drugs, money, and lax regulation - especially here in New Mexico - are killing horses and injuring jockeys.  Jockeys can refuse to ride (and some have); owners can refuse to race injured, at-risk horses.  But the horses are unjustly at our mercy.


New Mexico’s racing industry — the tracks and their regulators — has been unusually slow in responding to the safety alarms.

Four of the state’s five racetracks, including Zia Park and Ruidoso, are unaccredited, and the track where Mr. Martin’s injury occurred does not report accidents or positive drug tests to groups that monitor such events. 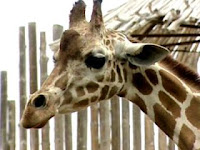 And even giraffes.  Remember Kashka, the beloved Rio Grande Zoo giraffe who was injured, then euthanized - and then dismembered and placed in a trash bin, just two years ago?

An entirely different situation, certainly.  Kashka received good medical care during her lifetime, and gave birth to six calves while in zoo custody.

Standard procedure would have had Kashka buried in a landfill.  And we Jews recite many times on Yom Kippur, "Cast us not away in old age; when our strength is gone, do not abandon us."

Abq Jew believes, with cautious optimism, that we can do better than this.  We are the caretakers and caregivers of the earth, not its owners!  And when the True Owner asks us how we have treated His creatures, how shall we answer?