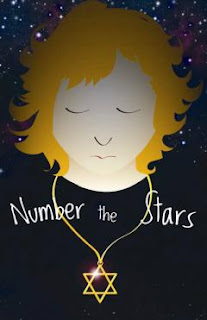 The heroine is a young girl discovering bravery despite her fear. The saga became an award-winning book, movie, and now a musical.

Lois Lowry wrote Number the Stars in 1989, based on stories told to her by a friend who grew up in Copenhagen during the German occupation.  The book won a Newbery Medal in 1990.


"How brave are you, little Annemarie?" Uncle Henrik asks his ten-year-old niece. It is 1943, and to Annemarie Johansen, life in Copenhagen is a complicated mix of ordinary home and school life, food shortages, and the constant presence of Nazi soldiers. Bravery seems a vague virtue, one possessed by dragon-slaying knights in the bedtime stories she tells her younger sister, Kirsti. Too soon, she herself is called upon for courage.

As the German troops begin their campaign to "relocate" all the Jews of Denmark, the Johansens take in Annemarie's best friend, Ellen Rosen, and pretend she is part of the family. Ellen and Annemarie must think quickly when three Nazi officers arrive late one night and question why Ellen is not blond, like her sisters.

Through Annemarie's eyes, we see the Danish Resistance as they manage to smuggle almost the entire Jewish population, nearly 7000 people, across the sea to Sweden. In this tale of an entire nation's heroism, Lois Lowry reminds us that there is pride and human decency in the world even during a time of terror and war.