One Cool Nectarine:  In what Abq Jew is sure is the hottest news of the new week, the UK's Daily Mail reports that Israel scientists have succeeded in breeding a black tomato. 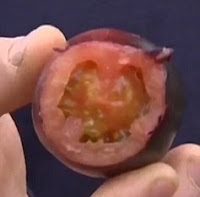 Israeli horticulturists have developed a gothic crossbreed of tomato that is red on the inside, black on the out.

To create the ‘Black Galaxy’ tomato, the breeders crossbred tomatoes with wild varieties. The dark colour comes from a pigment similar to one found in blueberries.

The pigment is photosensitive so the longer the tomato is left on the vine in the sun, the darker it gets.


Israeli scientists discovered a method for breeding tomatoes that are red on the inside but black on the outside. Afterwards, the government of Israel said, "Well, that wraps up the very last of our problems."

Apparently, the black tomato has anti-Occident properties.  And that's no accident.  As explained in this video, the black tomato was developed by leftist Kfar Ruthies (the moshav is on the left side of the Green Line), who say it can be aimed at Western luxury hotels.

Oops!  Abq Jew has just been advised that the 'Black Galaxy' has antioxidant properties.  An antioxidant - who knew? - is


a chemical compound or substance that inhibits oxidation. Certain vitamins, such as vitamin E, are antioxidants and may protect body cells from damage caused by the oxidative effects of free radicals.

Aha!  So, it's a battle between black tomatoes and free radicals, is it?  Watch out, Western luxury hotels!  The Free Radicals are coming!  But the forces of the Black Galaxy will defend you!

In any event, Abq Jew has been watching Excavating The 2000 Year Old Man on PBS, and much prefers nectarines to black tomatoes.

And while we're on the subject - here's a good word for the banana: