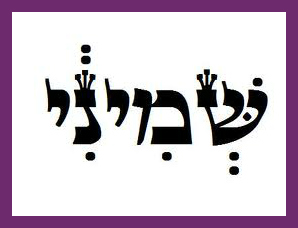 An accident occurs when an ox stumbles and the cart carrying the Ark wobbles and starts to tip and the cart's attendant reflexively reaches out to stabilize the Ark.  The attendant dies suddenly apparently in divine retribution for having profaned a sacred object.  King David becomes frightened and has the Ark temporarily stored in the home of a subject.  After 3 months pass, and the respective subject’s household appears graced and protected, King David brings the Ark once again into Jerusalem.  Again there is a magnificent celebratory procession with dancing and music and wine, and cake is distributed to the public.

A second connection between the Torah and Haftarah portions is that each narrates a significant moment in the story of the Ark of the Covenant. The Torah portion describes events during the consecration of the Tabernacle, the portable shrine that housed the Ark during the time of Wandering.  The Haftarah portion describes the Ark’s grand arrival in Jerusalem, marking the end of its travels.

Another parallel is that each portion introduces a dominant attribute of Jewish identity:  in the Torah portion the dietary restrictions, and, in the Haftarah portion, the centrality of Jerusalem.  The attributes are complementary: one is physical and the other spiritual.  The dietary restrictions concern a daily physical need; the centrality of Jerusalem is at the emotional core of Jewish spirituality.

We refer to Jerusalem as the Torah scroll is removed from the Ark.  When we celebrate Passover we proclaim: "next year in Jerusalem."  And we recall Jerusalem during the wedding ceremony when the glass is broken.

Some trace the etymology of the name Jerusalem to the Hebrew words that mean "they will see peace."  At present, there is not peace in Jerusalem.  As King David could only prepare for the construction of the Temple and could not witness its realization, perhaps we as well need to prepare purposefully for a Jerusalem of peace so that its realization can be witnessed by our descendants.  As the Community of Israel it is our obligation to work towards repairing a broken world.