Most Of Which Involve Duct Tape:  One of the many pleasures the relaxed, laid-back Jewish lifestyle afforded Abq Jew in Livingston NJ was watching The Red Green Show. 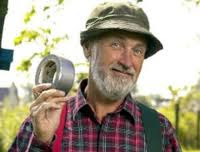 Who is Red Green?  The Red Green Facebook page says:


Born December 24, 1945 to mixed parents. Canadian. Male (except for the two weeks after the bicycle crossbar incident) Married to Bernice for 42 years. Right after he met his nephew Harold he made the decision not to have children. Has been leader of Possum Lodge since the late 70's. Does not receive a salary but has access to petty cash. Does not have significant formal education but has access to petty opinions. Retired in 2006 when he ran out of ideas. Rejoined the workforce in 2009 when he ran out of money.


Self appointed master handyman and outdoorsman and a weekly participant in Canada's socialized medical system. The Ambassador for Scotch Brand Duct Tape and a firm believer that no repair job should outlive you. Hates information but loves his own point of view. Likes taking things that were intended for one purpose and using them for something completely different. Oblivious to failure. (That could all change once he experiences success). Either the youngest old man or oldest young man you will ever meet.

So, to help us all make it through the weekend, Abq Jew is thoughtfully providing a brief video clip of said The Red Green Show right here.  You're welcome!

For those of you who thought this was really funny and really, really want to know lots more - here is a comprehensive biography of Red Green from the Red Green website:


Red Green was born up north, in the nether regions, in the years just after the war but just before the fighting. He was a complete surprise to his father and mother and everyone else at the Dance Contest. His father took one look at him and named him Red which was a disappointment for Mom. She wanted to name him Plaid. She got even when she bought him his first shirt.

Blessed with instinctive common sense, Red stopped growing at the height of 5 foot 8 since the door to the cabin was 5 foot 9. He attended Possum Lake School until he was 20 and then he went to Junior High, which he enjoyed very much until they assigned homework. He immediately left school to join his father's business - collecting unemployment insurance, but there were problems because Red didn't have enough job skills for the government to decide what type of work he was out of.

Eventually Red left home to strike out on his own, which is pretty much what he did. He tried his hand at carpentry and welding and then, while that was healing, he tried his other hand at plumbing and electrical work. In the hospital recovery room he met Bill and became interested in joining Possum Lodge. Around this time Red met his wife Bernice at a church picnic where they had both gone for the free food. Red and Bernice feel instantly in love and got married later that year without even waiting for the results of the pregnancy test.

Red became more and more involved with Possum Lodge and in time became the only guy that nobody hated and was elected Lodge Leader. He needed to refinance the Lodge so Red borrowed a large sum of money from his brother just before he was fired from the bank. Red is still paying his brother back by employing his brother's son Harold as the producer/director/dork of The Red Green Show.

Currently Red and Bernice are happily married without children and living in suburbia, but Red spends most of his time at Possum Lodge taking care of Lodge business and doing his television show and maintaining a safe distance between himself and the nearest factory outlet mall.

Red Green is the leader of Possum Lodge, Chapter 13, a northern Ontario eyesore who's motto is, Quondo Omni Flunkus Mortati (when all else fails, play dead). Red has the down home wisdon of Will Rogers, the rural charm of Garrison Keillor, and about 18 times as much handyman inventiveness as the entire cast of Home Improvement. Married to the ever-understanding and never seen Bernice, Red has no children, just a television show that's a fishing show, a fix-it show, and a men's advice program all rolled into about 3/4.

Red is the glue that holds the lodge together. He is friendly, inventive, cheap, and as honest as the day is long, which means he's the least honest on December 21st. When he works on his Handyman projects, Red is not stupid, he's just sort of lazy, impatient, and prone to subsitute sub-standard items (such as usiing duct tape instead of nails, screws, bolts, glass, glue, rivets, solder, or welding) so Red's projects are always less than reliable and more than butt ugly.

Red is deeply respectful of his wife Bernice, and quite the opposite of Harold. Viewers trust Red. He is sensible. He scorns fads and fancies. He cuts through the crap. He is everyone's friend and confident, because he is very tolerant. With friends like he has, he has to be.