Chocolate Maven Doesn't Deliver:  This morning Perri Yellin the Artist tasked Abq Jew with the Acquiring of Challah for Shabbat.  "How hard could this be?" Abq Jew asked himself.   "How long could this possibly take?"  Well .... 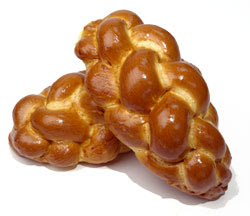 As he lives on the West Bank (of the Rio Grande) but not in Rio Rancho, Abq Jew first attempted to acquire challah at the Natural Grocers on Coors.  Members of Abq Jew's family - and others - had had a modest degree of success there before.

In fact, Marcos the Bread Guy told Abq Jew, Chocolate Maven no longer delivers anywhere.  Marcos was looking for a good local source for challah, so Abq Jew directed him to Dee's Cheesecake Factory on Menaul.

Have I mentioned that it was Abq Jew's job to come home with challah?  In an emergency, we still have seventeen boxes of leftover Passover Matzos, which are kosher though tasteless the rest of the year.  But there was no emergency; Abq Jew simply proceeded to ...

Trader Joe's on Paseo del Norte - where they were also out of challah.  It turns out, Lindy the Bread Gal told Abq Jew, that Trader Joe's also got challah from Chocolate Maven - and they hadn't increased their order for Trader Joe's own brand of challah (which does have a hechsher) since Choco Mav pulled the plug on them, too.


Lindy told Abq Jew (and Billy Nader) that the situation
will be corrected by this coming Thursday & Friday. 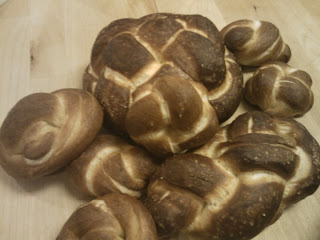 Actually, Trader Joe's did have a few loaves of ... wait for it ... pretzel challah (with a hechsher!)  on the shelves.  ("If you’ve never had pretzel challah, you will be pleasantly surprised. It’s a water challah that has a brown soft pretzel crust.")  Abq Jew politely declined.

Now we had an almost emergency.  What if ... what if there was no challah in the entire City of Albuquerque?  (In case he hasn't mentioned it - it was Abq Jew's job to come home with challah.)

OK, off to Whole Foods on Wyoming. And there, Abq Jew discovered ... piles of challah.  Sesame seed, poppy seed, and round challah with raisins that are traditionally for Yontif (holidays) but which Whole Foods sells year round.  Sort of like they sell hamentashen year round (except the week before Purim).

This simple Challah Quest put about thirty miles on Abq Jew's car and took him about an hour and a half.

Do you remember the 1990 movie Postcards from the Edge?


Substance-addicted Hollywood actress Suzanne Vale is on the skids. After a spell at a detox centre her film company insists as a condition of continuing to employ her that she live with her mother Doris Mann, herself once a star and now a champion drinker. Such a set-up is bad news for Suzanne who has struggled for years to get out of her mother's shadow, and who finds her mother still treats her like a child ....

Meryl Streep (born in Summit, NJ, 14 years before Abq Jew's Bar Mitzvah)  plays Suzanne Vale.  At the end of the movie (which is based on the book by Carrie Fisher about her own relationship with her own mother, Debbie Reynolds) Suzanne belts out a terrific Heartbreak Hotel.  Which has nothing at all to do with challah.  What?

You can always order Challah from Congregation Albert. It's made fresh each Friday morning by our volunteer bakers!