Paloma: A Play About Peace

Paloma will be presented at the NHCC in July and August, and then will tour to Santa Fe. 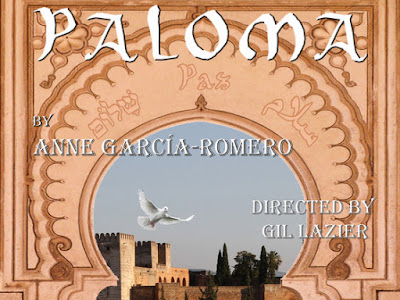 Anne García-Romero says of her play:


Ring of the Dove, a remarkable eleventh century Muslim Spanish treatise on love by Ibn Hazm, moved me with its elegant, witty and intricate considerations of romantic relationships.  Inspired by Ibn Hazm's text, I wrote my play Paloma as a response to the post 9/11 climate in this country.  The notion of convivencia intrigues me.  How did Muslims, Christians and Jews coexist peacefully in eleventh century Spain when religious intolerance persists in present day U.S. society?

Paloma explores the lives of Ibrahim, a Moroccan-American and practicing Muslim, who falls in love with Paloma, a woman of Puerto Rican descent and nominal Catholic, while they study ancient Muslim Spain at New York University in 2003. The couple soon travels to Spain where they grapple with their religious differences. The play also toggles between various months in 2004 as Ibrahim and Jared, his friend and lawyer who practices the Jewish faith, face legal ramifications resulting from Ibrahim and Paloma's relationship. In a way, this play is my prayer for greater coexistence in our present age.

Camino Real Productions is attempting to raise funds for its production of Paloma (a National Latino Playwriting Award runner-up) through Kickstarter, the world's largest funding platform for creative projects.

Your contribution here will help Camino Real's production of Paloma take wing, and expand the conversation about peaceful coexistence today.