Here Is The Proof:  Charles Garcia recently published a CNN opinion piece that asked, then answered, the 520-year-old question Was Columbus secretly a Jew? 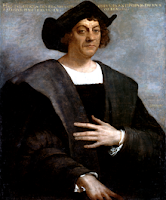 Abq Jew® (and almost all MOTs) would love to cite any clear, unambiguous statement from the Admiral himself that declares "Yes, I am a Jew."

But if Christopher Columbus was a Jew, he was a secret Jew.  And he did what secret Jews learn to do - destroy evidence and write in codes.

Throughout his life, Christopher Columbus never discussed his parents or relatives.

For those who wish to believe that Columbus was a Jew, there is plenty of evidence - but none of the evidence is clear or unambiguous.

There are two types of evidence - let's call them "circumstantial" and "documentary" - that historians have cited to demonstrate the plausibility of Columbus being a Jew.

Rabbi Brad Hirschfield (see JFNM Conversation on Israel Advocacy) wrote an insightful article, Columbus Day 2009: Was Christopher Columbus Jewish? for Beliefnet, from which Abq Jew® has learned and borrowed much.

Date of Departure.  It is well-known that Columbus set sail from Palos de la Frontera on the evening of August 3, 1492.  It is also well-known that - in accordance with the Alhambra Decree of March 31, 1492 - all Jews were to leave Spain by August 2, 1492.

August 2 was, as it turned out, Tisha b"Av, the traditional Jewish anniversary of the destruction of the two Temples in Jerusalem.

Why did the Pinta, Nina, and Santa Maria sail on August 3?  One claim is - to avoid starting such an incredible journey on such an inauspicious and unfortunate day.  Another claim is - because the harbor was so crowded with Jew-filled ships on August 2 trying to get out, Columbus's ships had to wait until the next day.

Friends, Crew, Supporters.  Hirschfield notes that "Columbus was known to frequent the company of Jews and former Jews, among whom were some noted astronomers and navigators, as well as his official translator. Marranos (another term for Jews forced to convert) figured prominently among Columbus’s backers and crew."

Rabbi Yosef Tropper wrote an exhaustive article, Was Christopher Columbus Jewish?  for Close To Torah, from which Abq Jew® has also learned and borrowed much. 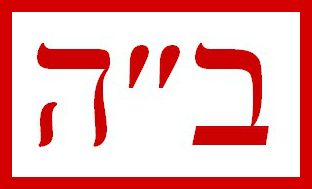 With G-d's Help.  When Abq Jew® read this statement by Tropper, his immediate reaction was "Case closed. There can be no question."


We have copies of thirteen letters written by Colón [Columbus] to his son Diogo, from November 12, 1504 to February 24, 1505. On twelve of them, there appears in the top left corner as a monogram in cursive script, the two characters “Beis” and “Hei,” which are the initials of the Hebrew words “Baruch Hashem“, which pious Jews have the habit of writing on top of their papers. [The thirteenth letter was to be shown to the Queen.]

What Abq Jew® envisioned was a clear, unambiguous ב״ה like that pictured above.  What the ב״ה actually looks like is shown below. 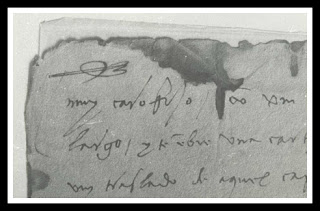 Do you see the ב״ה?  Tropper and many other scholars do.  Tropper explains:


This peculiar sign or cipher, according to Simon Wiesenthal (1973), appears on all of those letters in the upper left corner. This cipher consists of two Hebrew characters “bais” and “hey”, which stand for baruch hashem, an expression used by Jews. The letters bais and hey are intertwined like a monogram.

Jewish References.  Hirschfield points out that "Throughout his life [Columbus] demonstrated a keen knowledge of the Bible and the geography of the Holy Land."  Columbus "often quoted the views of rabbis and other Jewish learned men."  Columbus would "often compare himself to King David and Moses."  And Tropper claims that


Columbus employed peculiar dates and phrases unique to the Hebrew people. Instead of referring to the “destruction” or “fall of Jerusalem”, he used the phrase “the destruction of the second house”. He also employed the Hebrew reckoning of 68 AD, instead of 70 AD, to date the event. A marginal note dated 1481 is immediately given its Hebrew equivalent of 5241 ....

Bequests.  Columbus signed his last will and testament on May 19, 1506.  In that document, Columbus asked that one-tenth of his income be tithed to the poor; that an anonymous dowry be provided for poor girls; and that money be given to a Jew who lived at the entrance of the Lisbon Jewish Quarter.

Signature.  Which brings us to the final piece of documentary evidence - Christopher Columbus's enigmatic (to say the least) signature, one variant of which is shown below. 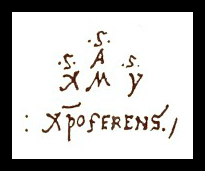 Columbus used a triangular signature of dots and letters that scholars say resembled inscriptions found on gravestones of Jewish cemeteries in Spain. He ordered his heirs to use the signature in perpetuity.  Tropper analyzes Columbus's signature thusly:


Colón’s [Columbus's] signature proves that he knew Hebrew prayers. His signature is found in two variants. Both are made of seven Latin characters arranged to form an equilateral triangle and below it, in one line, three letters and one word.

The difference between the two is only on the lowest line. In one it reads “Xpo FERENS”, while the other reads “El Admirante”. Many attempts have been made to decipher this strange cryptogram (including some supposed talk of kabbalistic basis, but I could not find anything on this). None proved satisfactory until M.B. Amzalak of Lisbon succeeded in 1927 to unravel the mystery of the seven letter triangle. Maurice Davis of New York, managed to discover the hidden meaning of “Xpo FERENS” in 1933. In Colón’s time, in prayer books, they would abbreviate recurring words as an initial between two dots. Thus for example, the symbol .A. would be Hashem’s name of Ad’nus. In light of this, Amzalak suggests that .S.S.A.S. stands for: “Santo Santo Santo Ado-noy S’baot” – “Holy Holy Holy is the Lord of Hosts” (Isaiah 6:3). These are the words that the angels on high say about Hashem and we recite in the prayers Uva Li’tzion and Kedusha.

As for the XMY, they are the Spanish letters which resemble three Hebrew letters. X equals Shin (both look similar). M equals Mem. Y equals Ayin. Handwritten they appear quite similar as you can see in the copy of his signature. He slanted the Y very much so that it looks like an Ayin without requiring much imagination. There are no dots because these letters represent nothing, rather they spell out a specific word, a word which begins a very fundamental Jewish phrase: Shin-Mem-Ayin – Shema. This is the first word of the affirmation of the Jews monotheistic faith: Shema Yisra’el Hashem Elokeinu Hashem Echad, Hear O Israel that Hashem our God is One. Together, the seven letters stand for the Jews ultimate expression of faith.

“Xpoforus” was a commonly used word, short for “Christophorus.” “Xpo” stood for “christo” and “forus” meant “bearer.” But Colón’s word is different. The word “Xpo” is separate, inferring that it may constitute the first letters of three separate words. “FERENS” means “carrier” in Greek. Its Hebrew equivalent is “No’say.” Maurice Davis therefore suggests that “Xpo FERENS” stands for: “Nosei Avon Va’pesha Vi’chata’ah” – “Forgiving iniquity transgression and sin”, the appeal for God’s mercy, which Jews repeat no less than thirty-two times during the prayers on Yom Kippur. Notice that there is a Colón (:) immediately before “Xpo FERENS.” In Hebrew the Colón means stop or the end of a sentence and in Spanish it means that there should be a surname, perhaps “Colón” before it. For Jewish readers it signifies that it should be read from right to left. This way reveals a secret Hebrew meaning, namely FERENS = Carries (Nosei), O = O’von, P = Pesha, and X = Chata’ah. He was begging God’s forgiveness for his formal adherence to the foreign religion. It seems that Colón used this signature to avoid using his Christian name and perhaps in hope that someday someone would find its hidden message and realize his true religion. As soon as the title “Grand Admiral of the Ocean Sea” was given to him, Colón signed “El Admirante”, instead of “Xpo FERENS” in all of his letters except the ones sent to his son. In his will, in which he tells his children that his title is to be kept in perpetuity, he tells them never to omit the seven letter cryptogram and “not to sign more than El Admirante”. In other words, “don’t sign your Christian names!”

What does all this mean?  Abq Jew® strongly encourages you to click the links, examine the sources and resources - then decide for yourself.


The evidence seem to bear out a far more complicated picture of the man for whom our nation now celebrates a national holiday and has named its capital.

As we witness bloodshed the world over in the name of religious freedom, it is valuable to take another look at the man who sailed the seas in search of such freedoms - landing in a place that would eventually come to hold such an ideal at its very core.


Whoever Christopher Columbus was, and however he is remembered, this much we know: he was a boundary crossing explorer who drew on multiple identities and traditions in ways that empowered him to take incredible chances when others would not, see remarkable opportunities where others could not, and accomplish things big enough that their full implications were beyond anyone’s understanding. That is the stuff of spiritual greatness.


Colón may have failed to reach Israel, but he did lay down the foundations of a new home for a large number of morranos in his time. Although Colón never had the opportunity to confess his true religion, indeed it is his discovery that has lead [sic]to the vast amount of Torah and Judaism which is learned and practiced freely today. For that, whether or not I have you convinced you that he was Jewish, he definitely deserves some thanks!

The article states that Columbus told his children “not to sign more than El Admirante”. His inheritor was also an Admiral but could this title of El Admirante have also been a code to pass on to the descendants that would not be Admirals? The word “El” in Spanish is the definite article "The" and Admirante can refer to the Navy's highest rank of Admiral or to the word admirable. If Columbus was an Anusim i.e. a person forced to deny/hide his Judaism and convert to Catholicism could he have also asked his descendants to sign “El Admirante” to point to the G-d of the Jews who is Admirable or Awesome? This reminds me of the words of the prophet Jonah (Yonah) 1:9 where the prophet Jonah told the sailors on a ship: "I am a Hebrew, and I fear the Lord God of heaven, Who made the sea and the dry land." If he was a Jewish sailor, he would probably have know this verse. For a Jew, the fear of Hashem is not terror of His power over us, but rather awe at how far above us G-d is. Jews express that distance by referring to the Heavens (Hebrew Shamayim) which is literally and figuratively the unreachable. G-d is El Elyon, The Most High G-d. Thus, The Fear of Heaven is awe and admiration of G-d's unknowable greatness. If my theory is correct then the signature meant “Holy Holy Holy is the Lord of Hosts” (Isaiah 6:3) Shema..Hear/Obey (The One Who is) “Forgiving iniquity transgression and sin” OR G-d the Awesome (the One I fear). Just a theory. Could this be plausible?