Klezmer! Nahalat Shalom! This Weekend!  Yes, Abq Jew has mentioned this before. But here we go once again, now that this year's very successful A Taste of Honey has come and gone: 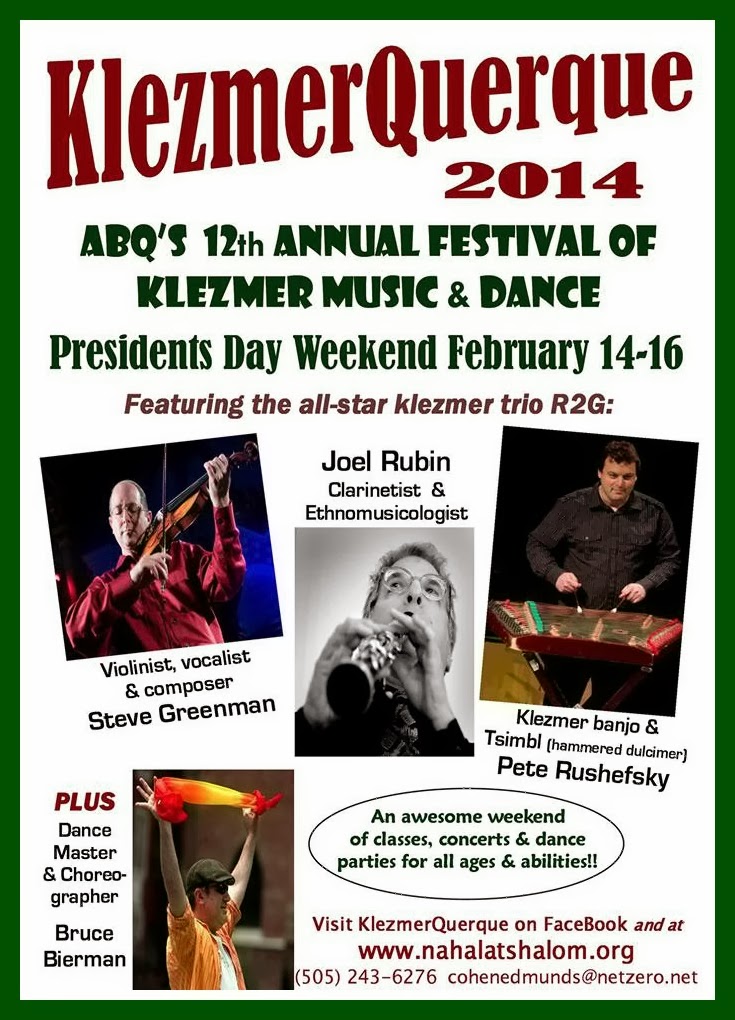 Here is the plan:

The 12th Annual KlezmerQuerque is a three-day festival of concerts, workshops and dance parties featuring ‘Klezmer’ which is the traditional dance and instrumental music based in the ancient wedding ceremonies of the Eastern European Jewish people.

The festival will take place from February 14-16, 2014 (Friday evening through Sunday evening) over Presidents Day weekend.

KlezmerQuerque is produced by Congregation Nahalat Shalom, its 26-piece intergenerational Community Klezmer Band and Rikud Yiddish dance troupe. The festival presents a wide variety of events for all ages and abilities with prices ranging from free to $20 per event.


Highlights of the festival include

The two performances by R2G will showcase music from the trio’s concert in December 2013 for The New York Klezmer Series at The Stephen Wise Free Synagogue. The group will feature traditional klezmer and Sephardi-Ottoman pieces as well as riveting new compositions and improvisations by Greenman, Rushefsky, and Rubin, including repertoire from Rubin’s CDs Midnight Prayer and Beregovski’s Khasene, and Greenman’s CDs Stempenyu’s Dream and Stempenyu’s Neshome.

Bruce Bierman will lead the dancing at the parties on Friday and Saturday evenings, also leading Nahalat Shalom’s Yiddish dance troupe in a performance of a Shabbat Yemenite dance on Saturday evening. Bruce is a member of the newly formed Yiddish Theater Collective in Berkeley California, which he will be directing and choreographing 'Di Megllieh of Itzik  Manger' for the upcoming Jewish Music Festival in San Francisco in March. He will be teaching  a scene from this musical as one of the KlezmerQuerque workshops on Sunday, February 16.

KlezmerQuerque begins on Friday, February 14th at 6:00pm, with a special free children’s and family program led by Maddy Solomon: ‘The Music Garden for Children: new born to 5 years’... Whilst toddlers sing, dance, play eco-percussion, and marvel at puppets emerging from around them, their parents, grandparents, and siblings all learn Yiddish children’s songs accompanied by accordion and flute. Popularized in New York City, participants exclaim, “A cornucopia of music, dance and delights for the senses!" and "Madeline Solomon; our very own ‘Mary Poppinsky’ with whom all of our children love to dance and sing!”  The Music Garden has delighted children and adults alike through Europe, USA and Canada from 2009 to date.

On Saturday, February 15th from 10am-noon there will be a free joyous ‘Shabbos Koydesh’ worship service led by Nahalat Shalom’s Rabbi Deborah Brin, with music by Beth Cohen, Alavados ensemble and friends.

On Saturday night, the concert and dance party featuring R2G and Bruce Bierman begins at 7:00 pm (doors at 6:30 pm) with opening act The Rebbe’s Orkestra.

On Sunday, February 16th there will be three 90 minute music & dance workshops with the guest artists plus a ‘Lunch ‘n Learn’ featuring a delicious ‘milkhik’ (dairy, fish, veggies, no meat) lunch followed by a presentation by Dr. Joel Rubin:  "Life began with the Lower East Side: Klezmer music in the Yiddish-speaking immigrant community.” Ambush Brass, an Albuquerque-based 8-piece trombone ensemble will serenade diners with their arrangements of klezmer music during lunch. 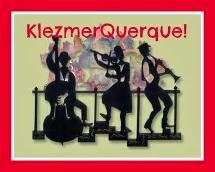