Changing Perceptions: Last Friday morning, Abq Jew had the all-too-infrequent opportunity to visit the Albuquerque Museum of Art and History.

Abq Jew was there to attend an Albuquerque OASIS-sponsored tour of the exhibition Changing Perceptions of the Western Landscape. Andrew Conners, the Museum's Curator of Art, was our guide. 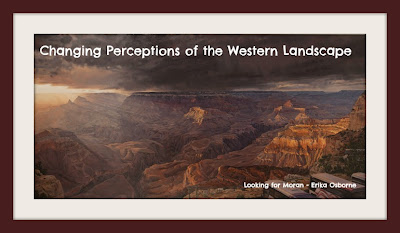 
Changing Perceptions examines the revived interest in landscape by contemporary artists, demonstrating the power of the land to speak to the imagination.

Recent works in painting, photography, printmaking, and even sculpture trace the evolving image of the landscape in art of the last 40 years. Many contemporary landscape artists explore the way that humanity has laid its hands on the land. Fences, dams, highways, and billboards appear as an acknowledgement that pristine wilderness is a rarity, foreign to most peoples' experience.

Their passionate visions of the landscape take viewers on vividly detailed journeys around the American West and into the challenging imaginations of modern day explorers.

The first work we viewed was The Grand Library, a sculpture by Guy Laramée. In the photo above, we see what appears to be a not-especially-interesting representation of the Grand Canyon.

How nice, we think. But take another look. 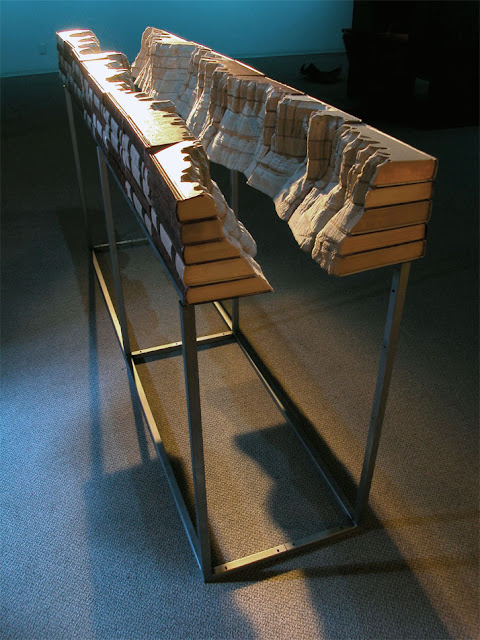 The sculpture is actually a carved-book landscape, which Laramée made by sand blasting a set of the Encyclopedia Britannica. (The covers of the stacked volumes had been glued together.)

Laramée, it turns out, is known for this technique.The online art magazine Yatzer says:


The human spirit transcends the known through the work of Guy Laramée, the Montreal based artist who pushes the materiality of the common book to the limit.

About his creative process, Laramée says:


Inspiration is a very mysterious thing. It comes unexpectedly. Of course, having baked some preoccupations for more than thirty years now – questioning the ideologies of progress, being nurtured by non-western cultures, rooting myself in the existential and the meaning of suffering, questioning our fascination for the accumulation of knowledge, etc – it is normal that inspiration would come in the guise of these questionings.

The book is a good example. It came out very casually. Whilst working on a sculpture in a metal shop, I looked over to a sandblaster cabinet that I used occasionally and thought to myself ''what would it be like to put a book in there?''

And there it was. In seconds, the whole thing bloomed. I saw the landscape and the whole line of work actually.  But many discoveries go unattended, for lack of proper ground. I think the reason why I picked up this thread so readily is that at the time, I was doing a master in anthropology. (I was actually doing two master degrees simultaneously - another one in visual arts.)

So this discovery – sandblasting books – just gave form to my ambiguous relation to academia and to knowledge in general. For years I had been questioning this need that we have to pile things into our head.

Wisdom, I thought, must be the exact opposite: emptying one’s certitudes, instead of building them. Or rather founding another ground to certitude than sheer belief –our so-called sciences, what I call the ''religions of the objective''.

You can read (and see) more at the Yatzer website. 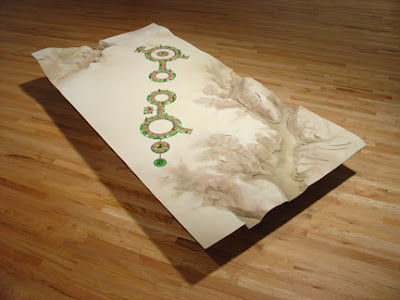 Another sculpture that caught Abq Jew's eye was Manifest Destiny, by Amelia Bauer and Robert de Saint Phalle, which has been acquired for the Museum's permanent collection. Bauer's website tells us:


Amelia Bauer’s oeuvre is a series of discrete investigations into our cultural conceptions of the natural world. She examines her surroundings - particularly the deserts of Northern New Mexico and the forests of Central New York - through a lens of history and mythology. Aesthetic traditions are repositioned to create spaces that exist somewhere between our fears of the uncultivated wild and our romanticism of the “virgin” landscape. In this way Bauer explores the American experience of the frontier -- the transitional landscapes at the boundaries of civilization.

Bauer’s interventions, both photographic and sculptural, are representative of a distinctly American endeavor to bend nature to will yet also address the psychological and historical motivation underlying such efforts. Whether through applying decorative themes and gestures to materials found outdoors or interfacing directly with the environment itself, the outcome is a nuanced marriage of the inherently untamable and the age-old human desire for control.

Manifest Destiny is a topographical view of a suburban desert subdivision as it might be seen from an alien spacecraft. But who or what is truly alien here? 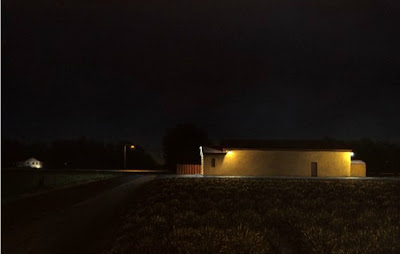 The last work we viewed was Grange Hall, a night painting by David Hines. Hines says of his work:


Most of my work, both in photography and in painting, has focused on night images, primarily of the western Mojave Desert and California's Central Valley.  My  interest in this subject matter grew out of road trips I took as a child with my father in New Mexico.

I find the desert and the night go well together in my art.  At night, the vast distances of the stars become obvious, a desert in itself, and the far horizon melds the two deserts into one.  In this twin desert of sky and land, I explore outposts of human habitability.  Mystery and loneliness are the themes that unite all of my night work, and they are palpable in the infinity that darkness suggests.

Now, as you all must know, Abq Jew is not an artist. But Perri Yellin (Mrs Abq Jew) most certainly is, and (lehavdil) Roselyn Yellin z"l, Abq Jew's mother, most certainly was. Thus Abq Jew may have acquired some of the artist's sensibility.

In any event - Abq Jew was most definitely captivated by this exhibition.

If you've been reading the Albuquerque Journal, you know that Wesley Pulkka covered Changing Perceptions in Awestruck in America's West. And abq ARTS also covered the exhibition here.

But those articles were published way back in June ... so Best Abq Blogger Candidate (see Best of Abq 2013) Abq Jew is here to remind you that there's plenty to see and do in Duke City.