Truck Stops: You don't have to tell Abq Jew. He knows. Now that the fast of Tisha b'Av is behind us, now that the Three Weeks of mourning have ended, all us New MexiJews are asking:


Where can I get a kosher taco?

Funny you should ask. 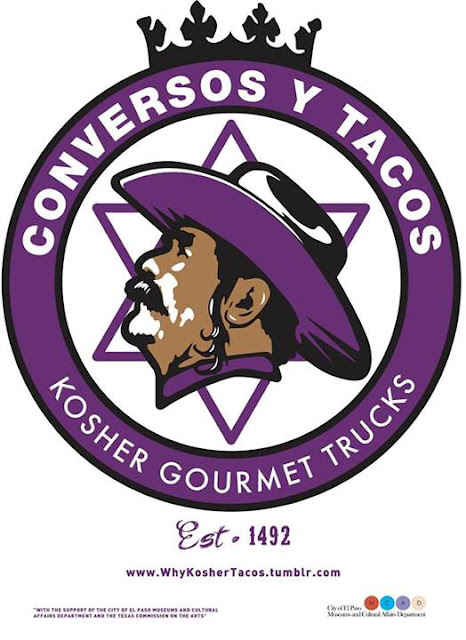 Peter Svarzbein
with the generous support of the City of El Paso's
Artist Incubator Program, B'nai Zion's Anousim Conference
and the Jewish Federation of El Paso
cordially invites you to attend

The unprecedented event begins Saturday July 25 from 9:00 to 11:00 pm, as part of the 10th Annual Anousim Conference at El Paso's Congregation B'nai Zion. In an effort to discover forgotten history through delicious food, artist Peter Svarzbein brings together some of the best and brightest people from the border to ask the question "Why Kosher Tacos"? With Conversos y Tacos Kosher Gourmet Trucks and Svarzbein has crafted a language to connect Jewish and Mexican food traditions in order to spark an interaction about the often hidden Spanish Jewish presence in the Southwest and Latin America.

This innovative art installation, utilizing the language and form of a food truck company, deals with the history, culture and mythology that exists here in the borderlands between the varied citizens of the Southwest.


"Starting 8 years ago I began to work on a body of work photographing and interviewing Latino families who have made an effort to return or convert to Judaism, believing that they were descendants of forced Jewish Converts to Catholicism, (aka Conversos), “ says Svarzbein.

“I travelled from Mexicali to Midland, Texas collecting images and stories along the way. When I found out about the City of El Paso's Artist Incubator Program, which helps to fund innovative and location based work by El Paso Artists, a light bulb went off in my head and my belly growled and I knew El Paso needed some delicious Kosher Tacos as a way to create a space to talk about this interesting and relatively unknown aspect between our shared Spanish and Jewish histories."


Visitors of all ages will get the unique opportunity to participate in a culinary experience like no other here in the Paso del Norte region:

Svarzbein, collaborating with Downtown El Paso's Hello Day Cafe, will be set up to sling delectable Kosher Tacos at 5 different locations throughout the city from July 20­-27. 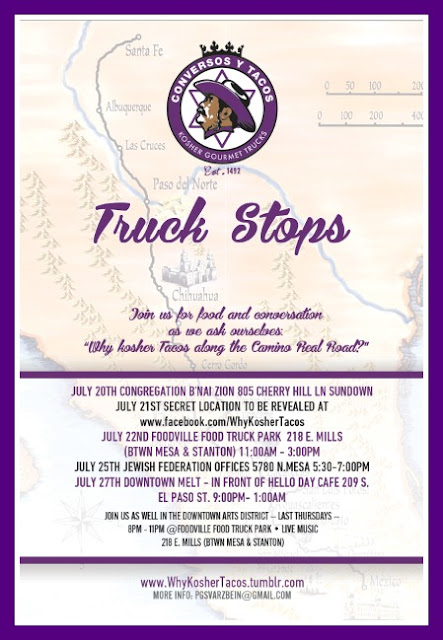 Conversos y Tacos collaborators include:
As part of the Kosher Taco Truck experience, singer / songwriter Chrissy Gurrola has reinterpreted classic "Ladino" songs, which were created by Sephardic (Spanish Jews) communities over 500 years ago in Spain.  Music producer Justin Leeah was involved in recording these songs, which can be heard only at www.facebook.com/WhyKosherTacos and www.WhyKosherTacos.tumblr.com.