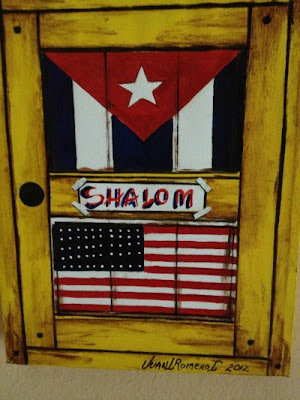 At the Centro Hebreo we received a tour of their landmark “El Holocausto” pictorial exhibit, funded by the Simon Wiesenthal Center, the Shoah Foundation and Jewish Cuba Connection. According to Miller, an agreement had been signed by the Centro with Havana’s two universities to bring their students to the center to learn not only about the Shoah, but also about the rudiments of Judaism and Cuba’s admirable legacy of providing refuge to the Jews of Poland and Germany who managed to escape Hitler’s rise.


Like Havana’s other synagogues, the Centro functions as far more than just a house of worship; weekly, nearly seventy senior citizens subsisting on a monthly government allowance of $250 pesos – or less than $10.00 a month -- come to the Centro to be fed, receive medications from the pharmacy, and get some needed companionship.  A Shabbat meal offers the almost impossible luxury of pollo (pork, alas is far less expensive), and a modest desert which fills the Centro’s social hall with hungry worshipers.

With immigration laws continuously loosening, Aliyah is leaving a largely elderly population behind. Still, Myra Levy, the Centro’s president and a retired physician announces proudly that the community saw seven weddings this past year, a function of JDC’s groundwork. “We have a living community,” she says proudly, but explains that it takes work – lots of hard work – to maintain it. With the possibility of a fulltime rabbi (“Who’s going to pay for it?” she scoffs) out of the question, the community members are responsible for their own spiritual needs  Besides, what Rabbi could bridge the Ashkenazi-Sephardic divide and travel the length of the country on a regular basis, Levy asks.

“Our priority is feeding people,” she says, with the first anniversary of the Centro’s Mitrani Jewish Senior Center a particularly gratifying occasion for Levy; to see people in their eighties, laughing and dancing was for her confirmation that the Center would survive.

Having recently represented Cuba at a World Jewish Congress conclave, Levy was relieved to learn that Cuba’s Jews seemed to be faring better than at neighboring Latin American nations; “Venezuela? Oh my God,” she gasped. Her community’s problems, she explained, were largely economic rather than political, although the food shortages, crumbling infrastructure and blackouts were no walk in the park.

In the Old City stands Adath Israel, Cuba’s sole Orthodox congregation founded in 1925 by Eastern European Jews awaiting visas to the United States. Overseen today by Yacob Brezniak, a towering, bearded third generation Turkish-Jew, Brezniak is the only one in the congregation that can read Hebrew; his late father was a synagogue president so completely devoted to his duties that while dying he asked to be brought to the shul rather than to the hospital.

Serving not only as the kosher butcher (“my father was a shochet, I am a shochet,” he proudly announced), the thirty-something also fulfills roles as cantor, director and curator of the shul’s surprisingly extensive DVD library.

As expected, most of the Adath Israel congregation is elderly and poor. Gifts from tourists keeps things operating, as does the sale of the Judaic arts and crafts the seniors make on an ancient, foot-pumped Singer.  A doctor visits twice a week, dispensing meds from the makeshift pharmacy, and Cuba’s only Mikveh - is also on site.

Despite uncertain finances, the shul had managed to purchase two busses for their senior transportation program and offer a host of other resources for their increasingly frail members. And here was a young Jew seemingly there to stay: aside from a period during which he studied with Rabbi Shlomo Riskin in Efrat (which is where he met his wife, the mother of their infant daughter), Brezniak remained as tightly tied to Havana as the braids on the Magen David-decorated doll I purchased there for my nine year-old daughter.

“I believe in miracles, he professed in halting English. “You have to believe that there will be a change in Cuba, and that the young people will come back.”

Meeting later with Professor Maritza Corrales, arguably the leading expert on the Cuban Jewish Community, we learned that Jews have never been excluded or discriminated against in Cuba. “From the time of Columbus, when Cuba was a stopping ground for Conversos, she said, “Cuba has been regarded as a paradise for Jews.”

During his fifteen year exile in New York, Cuban national hero José Martí found Jews to bankroll his revolt against Spanish colonialism, including Joseph Steinberg, Marti’s “Honorary Captain of the Revolution Army.” Roosevelt’s Rough Riders brought in more Jews as suppliers and upper-class Jews enticed by the tobacco and agricultural interest followed.  By the 1930’s, Polacos   -- Jews from Poland, Russia and Hungary -- started arriving, although generally not by choice; the quota restrictions in the U.S. made it necessary to check into what became known as “Hotel Cuba,” a temporary stop en route to the Golden Medina.

During this period, books on Cuban subjects were authored in Yiddish, and a Havana saw a confluence of both Orthodox Jews and socialist yiddishists who venerated Marti and began publishing a Yiddish-language newspaper, Habaner Lebn. After Kristallnacht came the arrival of German Jews who didn’t care to mix with the polacos, and who built their own synagogues, theatres, and even a diamond factory.

After the revolution, Castro demonstrated a particular empathy towards the Jewish community; The kosher butcher shop in the Old City is believed to be the only business not nationalized after 1959, and despite his government’s lack of diplomatic relations with the Jewish State, Castro rationalized that Aliyah couldn’t be betrayal of the revolution as the Jews were simply returning to their homeland (in a fascinating 2010 interview with The Atlantic’s Jeffrey Goldberg, Castro actually affirmed his belief in Israel’s right to exist).

Meeting later with the leaders from Guantanamo and Santiago Jewish Communities who traveled across the country to meet with us, we were given presentation after presentation of their community activities: Enma Felice Levy, President of the Santiago community, screened a video showing community members lighting a menorah, celebrating Tu’beshavat and Purim and performing Israeli dances; all activities one would find at any U.S. Jewish Community Center,  with the notable difference  this is a community where Santa Efigenia Cemetery graves are regularly raided by practitioners of Santería who believe that the bones of Jews have special ceremonial powers.

With many leaders of these communities recently converted Jews, the learning curve in navigating communal life was steep, the pressures overwhelming. Rodolfo Mizrahi, president of the Guantanamo community complained through an interpreter, “I want to step down as President, but nobody wants to take it over.”

This understandable frustration aside, there are young Cubans willing to step forward. Kabbalat Shabbat services at the Centro Sefardi were conducted by a young volunteer who chanted Lekha Dodi with Turkish inflections, his wife – a recent JDC-supervised convert, we learned – following along in transliterated Hebrew with their pre-teenaged son.

If there is one de facto leader of Cuba’s Jewish community, it’s Adela Dworin, President of Havana’s Casa de la Comunidad Hebrea de Cuba El Patronato, known more simply as “the Patronado.” Dworkin, a smartly dressed woman in her seventies, knows how to charm her Diaspora benefactors with a practiced speech heralding the Patranado’s social services, Sunday school, and extensive senior activities that even include weekly Tai Chi instruction.

An honorary member of the Jewish Federation of North America’s Lion of Judah Society, and lifetime Hadassah member, Dworkin is the public face of Cuba’s Jewry to the machers; when Pope John Paul II visited Cuba in 1998, his itinerary included a visit to the Patronado, and it was Dworkin who personally invited Castro to stop by the center for a Chanukah party.

Admitting that he had never heard of the Festival of Lights, Castro seemed reluctant to visit. After Dworkin explained that Chanukah was all about revolution, Castro brightened quickly. “I’ll come,” he promised, and a photo of the octogenarian in deep conversation with Dworkin decorates one wall.  According to Dworkin, Castro was floored to learn how few Jews actually lived in his country; “But you make so much noise!” El Comandante declared. 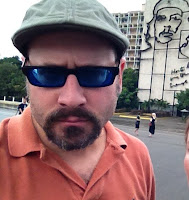