A Sabbath of Vision

Shabbat Hazon 2013: The Talmud tells us: 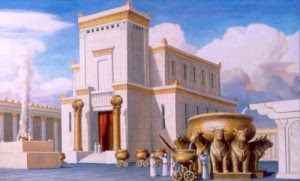 This Sabbath is called the Sabbath of Vision because of its Haforah - the third in the series of three Haftorot of Affliction - which begins:


The vision of Isaiah the son of Amoz, which he saw concerning Judah and Jerusalem, in the days of Uzziah, Jotham, Ahaz, and Hezekiah, kings of Judah.

Hear, O heavens, and give ear, O earth, for the LORD hath spoken: Children I have reared, and brought up, and they have rebelled against Me.

The ox knoweth his owner, and the ass his master's crib; but Israel doth not know, My people doth not consider.

Ah sinful nation, a people laden with iniquity, a seed of evil-doers, children that deal corruptly; they have forsaken the Lord, they have contemned the Holy One of Israel, they are turned away backward.

Much of the Haftorah is sung to the tune of Eicha (Lamentations), which we will - unless the Messiah comes while we wait! - sing mournfully when the Black Fast of Tisha b'Av begins this coming Monday evening.

Isaiah spoke of the Babylonian destruction; Simon Sebag Montefiore writes of the Roman destruction in his Jerusalem: A Biography:

On the 8th of the Jewish month of Ab, in late July AD 70, Titus, the Roman Emperor Vespasian's son, who was in command of the four-month siege of Jerusalem, ordered his entire army to prepare to storm the Temple at dawn.

The next day happened to be the very day on which Babylonians had destroyed Jerusalem over 500 years before.

Now, Titus commanded an army of four legions - a total og 60,000 Roman legionaries and local auxiliaries who were eager to deliver the final blow to the defiant but broken city.

Within the wall, perhaps half a million starving Jews survived in diabolical conditions: some were fanatical religious zealots, some were freebooting bandits, but most were innocent families with no escape from this magnificent death-trap.,

The Psalmist reminds us:

May we be comforted among the mourners
of Zion and Jerusalem.