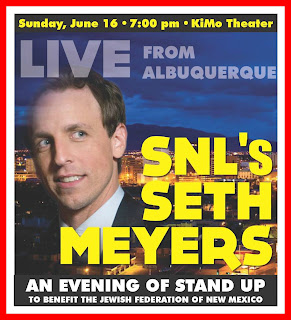 Meyers is in his eleventh season on Saturday Night Live as a cast member, and in his sixth season as both head writer and Weekend Update anchor.

As the sole anchor in this segment, the comedian charms audiences as he lampoons top news stories and hosts SNL fan favorite guests.

No, you can't miss this! And Abq Jew strongly encourages you to be there! Even if you haven't watched SNL since Chevy Chase left (1976, after the first season)!

Here is a forshbite (the White House Correspondents Dinner 2011) of what's in store for Albuquerque: