Jewish Federation of New Mexico Benefit: Abq Jew is pleased to remind y'all that Saturday Night Live's Seth Meyers will be bringing his stand-up comedy straight from the Weekend Update anchor desk to Albuquerque! 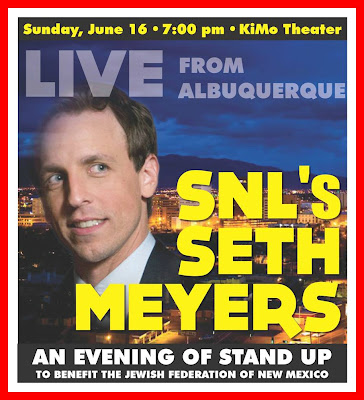 Please note that Abq Jew feels he is qualified to use the term y'all because he is from Bensonhurst, a neighborhood in the south of Brooklyn. And Seth Meyers? He's from Evanston, Illinois.

And if you believe Wikipedia - he's not even Jewish!


Seth Adam Meyers (born December 28, 1973 is an American actor and comedian. He currently serves as head writer for NBC's Saturday Night Live and hosts its news parody segment Weekend Update. In 2013, it was announced that Meyers had been chosen to replace Jimmy Fallon the following year when his edition of Late Night ceases production.

Meyers was born in Evanston, Illinois, the son of Hilary Claire (née Olson), a middle school teacher of French, and Laurence Meyers, Jr., who works in finance. His younger brother is actor Josh Meyers. He was raised in Manchester, New Hampshire, and its suburb, Bedford, and graduated from Manchester High School West. He went on to graduate from Northwestern University in Evanston, where he became a member of the fraternity Phi Gamma Delta.

And more to the point,


Meyers joined the SNL cast in 2001. In 2005, he was promoted to writing supervisor, and in January 2006 he became co-head writer, sharing the role with Tina Fey and Andrew Steele. In 2004, he auditioned to co-anchor "Weekend Update" with Fey, but lost out to Amy Poehler. With Fey's departure, Meyers became head writer for the 2006–2007 season and also took on the role of Weekend Update co-anchor with Amy Poehler. Since Poehler left the show during the 2008–2009 season, Meyers has anchored solo. In fall 2009, Meyers co-anchored two episodes of Saturday Night Live Weekend Update Thursday with Poehler.

On May 12, 2013, NBC announced that Meyers will be the new host of Late Night in 2014 succeeding Jimmy Fallon as Fallon will take over as the new host of The Tonight Show (NBC).

Meyers is an avid fan of the Boston Red Sox, Boston Celtics, the Pittsburgh Steelers (his father being a Pittsburgh native), the Northwestern Wildcats (his alma mater) and soccer club West Ham United in the Premier League.

Meyers has performed at several Jewish Community Centers, though he himself is not Jewish.

Hard to believe. Even so,  Abq Jew strongly encourages you to be there!

Here is another forshbite (that's Yiddish for hors d'oeuvres, one of the most-looked-up words on the Internet) of what's in store for Albuquerque. This one features New Jersey Governor Chris Christie - from Livingston, Abq Jew's former hometown - attempting to overcome his natural shyness.