Passing of Rabbi Leonard A Helman 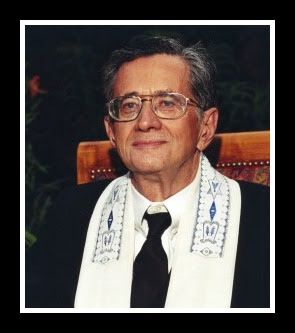 Rabbi Helman's funeral is scheduled for 11:00 am on Monday June 10, at the Cathedral Basilica of St Francis of Assisi. There will be a reception at La Fonda Hotel following the service. Interment will be at Santa Fe Memorial Gardens.

There is no measure to the enormity of Rabbi Helman's contributions to New Mexico Jewish life - indeed, to every aspect of life here in the Land of Enchantment.


Rabbi Helman has been the spiritual leader of Congregation Beit Tikva since our founding in 1995. Walking in downtown Santa Fe with Rabbi Helman is an enlightening experience, for every third or fourth person you pass greets him and stops to tell a joke, to reminisce about friends and family, or to check on his standing in the latest bridge tournament. On any given day, he can be found at St. Vincent’s Hospital visiting and comforting ailing congregants, friends, and casual acquaintances, or discussing topical issues with the hospital’s medical ethics board. He continues to officiate at life cycle events including Bar/Bat Mitzvahs, weddings, and funerals, and inspires us with his spirit and his understated dignity.

Known around Santa Fe as the “Rabbi Different,” he served for many years as the chaplain for the State Senate, is a masterful song-and-dance man who leads the crowd in celebration at the annual Fourth of July Pancake Breakfast on the Santa Fe plaza, and is a world-class bridge player whose team took first place at the Polish National Bridge Tournament in 2006. The Leonard A. Helman Bridge Center was dedicated in Santa Fe in 2008. From 1974 until his retirement in 1987, Rabbi Helman served as an administrative law judge and attorney for the New Mexico Public Service Commission. In May 2004, he was honored as a Santa Fe Living Treasure, and February 3, 2006 was declared by then-Governor Bill Richardson as “Rabbi Leonard A. Helman Day” throughout the State of New Mexico. On July 10, 2010, Rabbi celebrated the 70th Anniversary of his Bar Mitzvah.


"I guess I get bored easily," Rabbi Leonard Helman shrugs, by way of explaining his myriad interests and achievements. In addition to his theological calling, he has been a lawyer, a physiology teacher, a championship contract-bridge player, a masterful dancer who performs in public, a public-utilities expert, and always a humanitarian.

As a young man he taught himself to love opera, by listening to hundreds of hours of music. He assiduously reads The New York Times, to stay current with the news.

And 30 years ago, in 1974, he found the perfect position for himself, as the rabbi for Temple Beth Shalom, which was then the sole Jewish congregation in Santa Fe. With only about 60 families at that time, the temple was seeking a part-time rabbi—which was also exactly what Helman was seeking.

That way, he could do other things as well. <Continue>


When Santa Fe dentist Robert Wartell arrived in 1989, he began attending Temple Beth Shalom, then the only synagogue in town. It didn't take long for Wartell to fall under the spell of Beth Shalom's rabbi, Leonard Helman. "He took me to dinner, drove me around the town and talked about the places he liked, the people he knew— which seemed to be everybody," Wartell recalled recently. "One night we were in a restaurant and Leonard got up to talk to some people across the room. This ... waitress stopped by our table and whispered to me, 'Isn't that the town rabbi?'

In Santa Fe, there are several rabbis from Hasidic, Orthodox, Conservative and Reform Judaism. But it's Leonard A. Helman— once of Temple Beth Shalom, now the senior rabbi of Congregation Beit Tikva— who most readily comes to Santa Feans' minds when they hear the word "rabbi," which means teacher. Today, his congregation will celebrate Helman's coming 80th birthday with a dinner dance at La Posada. On Oct. 19, Beit Tikva's board of directors named Helman the congregation's "founding rabbi."

"He's obviously a very special person to a lot of us," Board President Paul Grace told the Journal. "He's the heart and soul of our congregation. We wanted to honor him in a way that no one else would ever be honored. No other rabbi will ever have that title as long as we last."

Helman, unassuming as always, seemed a little overwhelmed by the fuss over this birthday. "In the first place, it's unbelievable to me that I'm almost 80," he said. "I can't believe it. In fact, I don't think I do. And as for all this— I'm just not that important."

Or - here is an interview with Bill O'Donnell of Spirituality TV in Santa Fe.

May the memory of Rabbi Helman be forever a blessing.

I was fortunate to know Rabbi Helman for most of my life going back to before he personally trained me for Bar Mitzvah. Through the years, Rabbi was there for all significant events in my life,my marriage, my sons Brit Milah, the funerals of my dear parents, Irving and Marilyn Bell. and Grandmother, Sara Bearman. I will never forget the wonderful times I spent with the Rabbi at our house during Passover, Rosh Hashanah, etc. as he was a frequent gues for dinner at our house. I will miss the Rabbi very much but his memory will continue to guide and comfort me the remaining years of my life. Thanks Rabbi for always being there. Your memory will always be a blessing for me.