Celebrating Carole King: Did you catch Carole King on PBS? Mr & Mrs Abq Jew did, mostly because of the fortuitous rain delay in the Yankees-Mets Subway Series game.

And - we were able to do said catching from our luxurious hotel in beautiful, suburban West Orange, New Jersey, the next town over from our former home, Livingston.

West Orange is the home of Congregation AABJ&D (Ahawas Achim B'nai Jacob and David), The Alphabet Shul. And WO is known for one more thing, which we'll get to. 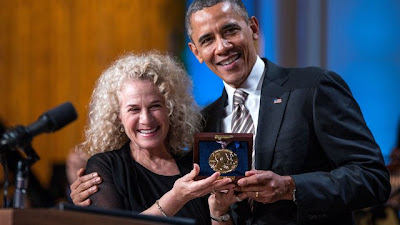 The evening will include performances by King, as well as by Gloria Estefan, Billy Joel, Jesse McCartney, Emeli Sandé, James Taylor and Trisha Yearwood. President Obama will present the Gershwin Prize to King during the event.  The sixty-minute television special is part of the Emmy Award-nominated PBS “In Performance at the White House” series.

The program will premiere Tuesday, May 28 at 8 p.m. ET on PBS stations nationwide (check local listings).

If you are among the too-young-to-remember, Wikipedia (of course) tells us about who Carole King is and what she's done for music: 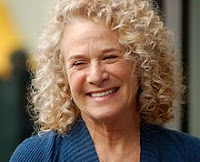 Carole King (born February 9, 1942) is an American songwriter and singer-songwriter.

Born Carol Joan Klein in February 1942 to a Jewish family in Manhattan, New York, her mother a teacher, and her father a fire-fighter.

She grew up in Brooklyn; learning the piano when four years old, and in 1950, when eight, appearing on The Horn and Hardart Children's Hour, with a school friend, performing "If I Knew You Were Comin' I'd've Baked a Cake".

While at James Madison High School in the 1950s, Carol Klein changed her name to Carole King, formed a band called the Co-Sines, and made demo records with her friend Paul Simon for $25 a time.

Her first official recording was the promotional single "The Right Girl" released by ABC-Paramount in 1958, which she wrote and sung to an arrangement by Don Costa. She attended Queens College, where she met Gerry Goffin, who was to become her song-writing partner.

When she was 17, they married in a Jewish ceremony on Long Island in August 1959, after King had become pregnant with her first daughter, Louise. They left college and took daytime jobs, Goffin working as an assistant chemist, and King as a secretary, while writing songs together in the evening at an office belonging to Don Kirshner's Aldon Music at 1650 Broadway opposite the Brill Building.

Neil Sedaka, who had dated King when he was still at high school, had a hit in 1959 with "Oh! Carol"; Goffin took the tune, and wrote the playful response "Oh! Neil", which King recorded and released as a single the same year; the b-side contained the Goffin-King song "A Very Special Boy".

The single was not a success; however, after writing "Will You Love Me Tomorrow", which topped the American charts in 1960 in a recording by the Shirelles - becoming the first No.1 hit by a black girl group, Goffin and King gave up the daytime jobs in order to concentrate on writing. "Will You Love Me Tomorrow" has gone on to become a standard, recorded by numerous artists.

During the sixties, with King writing the music and Goffin the lyrics, they wrote a string of classic songs for a variety of artists, such as "Take Good Care of My Baby" for Bobby Vee; "Up on the Roof" for the Drifters; "Chains", which was covered by the Beatles; "The Loco-Motion" for their baby-sitter Little Eva; "It Might As Well Rain Until September", which King recorded herself - her first (and only Sixties) hit; "I'm into Something Good" for Herman's Hermits; "Pleasant Valley Sunday" for the Monkees (inspired by their move to suburban West Orange, New Jersey); and "(You Make Me Feel Like) A Natural Woman" for Aretha Franklin.

You can watch the entire PBS program here. But if you just want a taste - here are Carole King and James Taylor, performing "The Loco-Motion", one of Carole's most spiritual, introspective songs.