A Day for Jerusalem!

Jerusalem Day! !יום ירושׁלים  An excerpt from a drash by Rabbi Burton Visotzky, of the Jewish Theological Seminary in New York, who was a teenager on a Camp Ramah Israel Seminar shortly after the Six Day War:

In 1967, all eyes were on reunited Jerusalem. It was nothing then like it is now. We celebrate Yom Yerushalayim, in part, to commemorate that, in 1967, there was a barbed-wire wall dividing the city’s Jewish and Arab sections. The war brought an end to that once and for all, or so we then prayed. The Old City’s Jewish Quarter was virtually rubble, haunted by feral cats, the smell of urine wafting through the air. There was no plaza in front of the Wailing Wall; there, too, it was rubble, trash, and a mixed multitude of humanity: Muslims, Christians, and, once again, Jews. 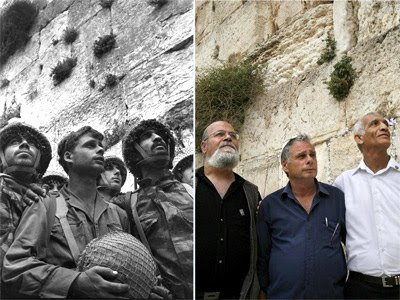 But then, what happened on Tisha b'Av, the traditional day of mourning for Jerusalem? Rabbi Visotzky recalls:


It was the most carnivalesque 9th of Av you might imagine. I, a mere teen, saw friends I hadn’t seen in years on that day at the Wall. Everybody, but everybody who could be there was there. Hasidim, Mitnagdim, secularists, kibbutzniks, urban dwellers, army troops, tourists, men, women, all together, pell-mell among the rubble heaped before the Wall. No separation of the sexes, no differentiation between Jews and Gentiles, no security check in place (yet) for those visiting on that day. And everyone, from rabbi to rebellious youth, from scholar to secularist, was quoting a text from the Tosefta.

I had no idea what the Tosefta was. Indeed, I never thought of it again until I came to study for the rabbinate at The Jewish Theological Seminary half a decade later. The Tosefta is an early rabbinic work, edited in the first-half of the 3rd century CE, a companion piece to the essential document of rabbinic Judaism, the Mishnah. Here is the Tosefta we learned on that day:


All who mourn for Jerusalem will merit to see her in her joy, as it is said, “Rejoice with Jerusalem and be glad for her, all you who love her! Join in her jubilation, all you who mourned for her!”

[Today] marks the 46th anniversary of unfettered Jerusalem. We pray for free access to all her holy sites for all who wish to worship there. Much as we saw on that first Tish’ah Be’Av in 1967, we yearn for a Jerusalem that is truly the City of Nations. Whether it be Jews enjoying Jerusalem or Muslims exulting in Al-Quds or Christians celebrating the Holy City, may all who love her rejoice!

For those of us living in חו״ל who lived through those terrible days leading up to the Six Day War - let's remember the sacrifices and celebrate the victory.  Lift a glass of wine!