Preparing to Repair:  Shavuot (שבועות‎), the Feast of Weeks, is a Jewish festival that occurs on the sixth day of the Hebrew month of Sivan. This year, Shavuot begins on the evening of Tuesday May 14. The festival days are Wednesday and Thursday, May 15-16. 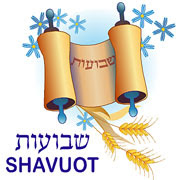 
Shavuot commemorates the anniversary of the day God gave the Torah to the entire nation of Israel assembled at Mount Sinai ....

The holiday is one of the Shalosh Regalim, the three Biblical pilgrimage festivals.

The word Shavuot means weeks, and the festival of Shavuot marks the completion of the seven-week counting period between Passover and Shavuot.

Shavuot is one of the lesser known Jewish holidays among secular Jews in the Jewish diaspora, while those in Israel are more aware of it.

One of the customs associated with Shavuot is the all-night study session - the Tikkun Leyl Shavuot. Lesli Koppelman Ross (in My Jewish Learning's discussion of Tikkum Leil Shavuot) explains:


Following the holiday meal, many people proceed to synagogue for Ma'ariv [the evening service], followed by an all-night (or into-the-night, as many last only until midnight) Torah study session based on the kabbalists' [mystics'] practice.

This specifically refers to the sixteenth century mystics of Safed, Israel, under the leadership of Isaac Luria. Many people recite Ma'ariv before the meal, go home to eat, and return to synagogue for the study session. All in all, Tikkun Leyl Shavuot is a relatively recent development.

We remain awake to show that, unlike the situation of our heavy-lidded ancestors at Sinai, there is no need to bring us to our senses; we are ready to receive Torah. The tikkun (which refers both to the study session and to the text used for it) was the only observance developed specifically for Shavuot .... 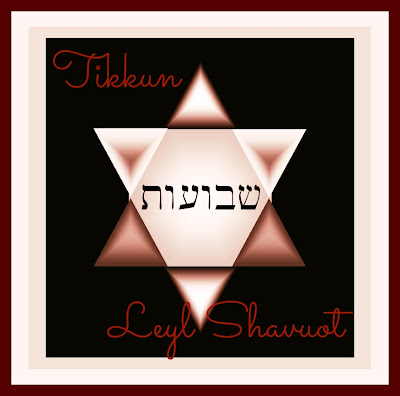 Here is how Rabbi Karpov describes the Tikkun text and the Tikkun proceedings:

A ‘Tikkun’, in the context of the writings of the Lurianic Kabbalists of Tzfat - the circle of Rabbi Isaac Luria of “L’cha Dodi” fame -  is a ceremonial text.

The sacred text Tikkun Leil Shavuoth, THE traditional text that the Kabbalists of Tz’fat sat up and studied all night on the first night of Shavuoth, so as to make a ‘tikkun’ in the sense of a ‘repair’ for what we had not completed on its archetype, the night when we were to have stayed up all night in anticipation of receiving Torah from Mount Sinai in the morning.

All Jewish souls ever born and ever to be born were there. And yet, even in anticipation of this momentous occasion, we were unable to remain awake that long.

To do a ‘tikkun’ – a repair – on our former faithless behavior, we sit up and study this text, a “Reader’s Digest” edition of core Jewish texts that implies, in both our subconscious and supraconscious minds, these texts in their totality, the entire night. This time, we can make it right.

The book’s structure is a sequence of selections, mostly juxtaposed snippets, from:
framed by a few Kabbalistic prayers and Kaddishes, with Abulafia sound-meditations embedded throughout.

The text of Tikkun Leil Shavuoth has been untranslated from the original Hebrew and Aramaic until now, when in 1991 Rabbi R Karpov, PhD, made - of an original 1812 Vilna edition mocked-up version spanning a number of thick loose-leaf notebooks containing the original text and the English translation, together with scholarly annotations in the ‘Torah’ section - a good resource for weekly Torah Study.

At first blush this would appear incongruous, but American poet Gertrude Stein wrote, “the question of juxtaposition is very important,” and these six verses now become their own text, with the subtext of Sarah’s having first conceived Ishmael’s existence in thought, and her therefore owing him her life, despite her later behavior towards him.

This year, Albuququerque Rabbi Chavah Carp’s home, the selective introduction to this text rarely used in modern times -- despite the current resurgence of interest in both sitting up all night and studying for Shavuoth, and simultaneously of interest in Kabbalah – will draw from each of the text’s major sections.

This sacred study session around this text of authentic Lurianic Kabbalah, wants to make a comeback. So enjoy.