Of Blessed and Melodious Memory:  Tony Martin, the debonair baritone whose career spanned some 80 years in films and nightclubs and on radio and television, died on Friday at his home in West Los Angeles. He was 98. 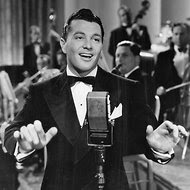 Mr. Martin represented the fantasy of the impossibly elegant troubadour warbling to equally elegant (and mythical) audiences at nightclubs and balls.

Mr. Martin’s long life in show business began in the late 1920s, when he formed his first band at Oakland Technical High School in California. He was still performing in nightclubs around the country well into the 21st century.


Tony Martin was born Alvin Morris in San Francisco on Dec. 25, 1913; his family moved across the bay to Oakland soon after. His parents were well-off Jewish immigrants from Poland who wanted him to be a lawyer. He attended St. Mary’s, a Christian Brothers college in nearby Moraga, where he was in the class of 1934 for a time. “I left in 1932,” he once said, “after one of the brothers told me I was flunking everything and should stick to music.”

He headed for Hollywood, where a new name, his good looks and his voice soon had him working steadily ....

This musical tribute was posted on YouTube earlier today: