Three Reasons Not to Watch the Olympics:  Can it be an accident - or an oversight, if you will - that the Opening Ceremonies of the 2012 Summer Olympics are scheduled for Erev Tisha b'Av, the saddest day in the Jewish year, a fast day that commemorates the destruction of the First and Second Temples, as well as other disasters that have befallen the Jewish people?

This year, Tisha b'Av actually falls on Shabbat. Since we are not permitted to mourn on Shabbat, the observance of Tisha b'Av is "pushed off" until Saturday night and Sunday. But the ninth day of Av begins, in fact, at the same time as the Opening Ceremonies.

So, there are the first two reasons not to watch the Opening Ceremonies - Shabbat and Tisha b'Av. But it's the third reason that has the entire Jewish world, certainly including Abq Jew, angry and upset.

For those of you too young to remember, Wikipedia offers a full account of the Munich Massacre - which took place but a few days before Rosh HaShanah 1972.

While we Jews have periodically and publicly commemorated the deaths of the eleven Israeli Olympic athletes, the International Olympic Committee (IOC) never has.

That is unlikely to change at the London 2012 Olympics - despite the IOC's hasty and unannounced - almost secretive - ceremony at the Athletes' Village on Monday.

The Olympic Moment, a recent editorial in The Jewish Daily Forward, points out:


All she [Ankie Spitzer, the widow of Andrei Spitzer, the fencing coach for the 1972 Israeli Olympic team] wants is a moment of silence, observed by the delegations of the 205 countries participating in the London games — a simple public recognition of the horrific events that needs to happen now, finally now, before memories fade and loved ones die.

But the IOC stubbornly refuses, contending that its members regularly pay tribute to the fallen athletes and coaches at memorial receptions held by the Israelis. That’s nice of them. An Israeli commemoration, however, is no substitute for an expression of mourning by the entire Olympic community. It sends a completely different message.

The nationalistic quality of the Munich massacre cannot be ignored. The victims, though they hailed from many different countries, were there as Israelis. That is why they died. Black September did not commit a random act of terror; theirs was a targeted political statement.

But to hide behind that political message as the IOC seems to be doing, and to pretend somehow that honoring the victims takes a side in the Israeli-Palestinian conflict, is deeply offensive and morally repugnant. A moment of silence, instead, sends this message: Terror is not a welcome participant in the Games. Ever. 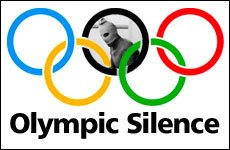 And as Rabbi Shraga Simmons puts it in Olympic Silence, an editorial at Aish.com:


In the years since [1972], the families of the victims have repeatedly told the IOC that all they want is a chance to mark the murder of athletes who had traveled to the games to do precisely what athletes do: compete at their very best. These victims deserved to be remembered by the very organization that had brought them to Munich.

Why the IOC refusal? The Olympic Committee’s official explanation is that the games are apolitical. The families were repeatedly told by long-time IOC President Juan Samaranch that the Olympic movement avoided political issues. He seemed to have forgotten that at the 1996 opening ceremony he spoke about the Bosnian war. Politics were also present at the 2002 games, which opened with a minute of silence for the victims of 9/11.

The families have also been told that a commemoration of this sort was inappropriate at the opening of such a celebratory event. However, the IOC has memorialized other athletes who died “in the line of duty.” At the 2010 winter games, for example, there was a moment of silence to commemorate an athlete who died in a training accident.

The IOC’s explanation is nothing more than a pathetic excuse. The athletes who were murdered were from Israel and were Jews—that is why they aren’t being remembered. The only conclusion one can draw is that Jewish blood is cheap, too cheap to risk upsetting a bloc of Arab nations and other countries that oppose Israel and its policies.


I have long inveighed against the tendency of some Jews to see anti-Semitism behind every action that is critical of Israel or of Jews. In recent years some Jews have been inclined to hurl accusations of anti-Semitism even when they are entirely inappropriate. By repeatedly crying out, they risk making others stop listening—especially when the cry is true.

Here the charge is absolutely accurate. This was the greatest tragedy to ever occur during the Olympic Games. Yet the IOC has made it quite clear that these victims are not worth 60 seconds. Imagine for a moment that these athletes had been from the United States, Canada, Australia, or even Germany. No one would think twice about commemorating them. But these athletes came from a country and a people who somehow deserve to be victims. Their lost lives are apparently not worth a minute. 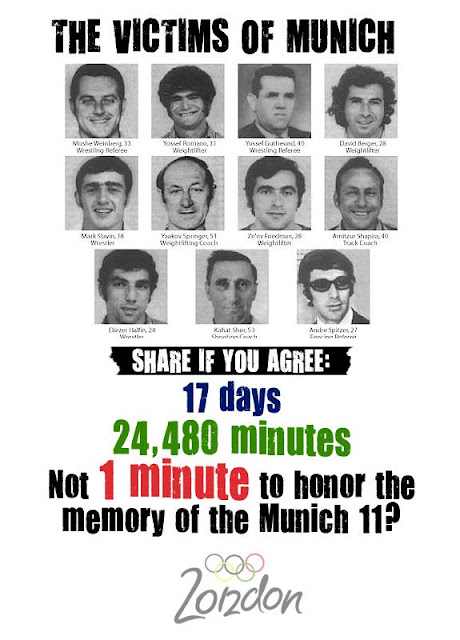 The atheletes who passed away deserve every tribute and honour.

I am unaware of what the reasoning would be not to show sympathy for the 1972 incident, during the opening ceremonies of the Munich Olympics. I also am unaware if the nationality has anything to do with the decision in not mentioning the anniversary of the incident. Nonetheless, there should have been something to pay tribute to these atheletes.