Aliyah Means Going Up:  It is so good to see that American Jews, young and old, still do make aliyah. Abq Jew has a video below of the latest Nefesh B'Nefesh arrivals. But who were the first? 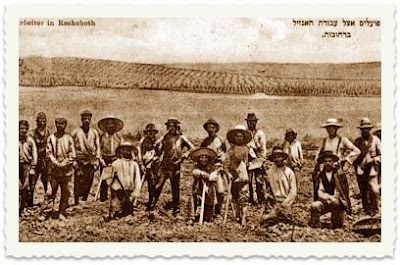 Bilu is an acronym based on a verse from the Book of Isaiah (2:5) "בית יעקב לכו ונלכה" Beit Ya'akov Lekhu Venelkha ("House of Jacob, let us go [up]").

The wave of pogroms of 1881-1884 and anti-Semitic May Laws of 1882 introduced by Tsar Alexander III of Russia prompted mass emigration of Jews from the Russian Empire.

In July 1882, the first group of Bilu pioneers arrived in Ottoman Palestine. The group consisted of fourteen university students from Kharkov led by Israel Belkind, later a prominent writer and historian. After a short stay at the Jewish farming school in Mikveh Israel, they joined Hovevei Zion colonists in establishing Rishon LeZion ("First to Zion"), an agricultural cooperative on land purchased from the Arab village of Ayun Kara.

Plagued by water shortages, illness and financial debt, the group abandoned the site within a few months. They then sought help from Baron Edmond James de Rothschild and Maurice de Hirsch, who provided funding that led to the establishment of the local wine industry. In 1886, construction began on a winery in Rishon LeZion that became a successful wine-exporting enterprise.

In the winter of 1884, another group of Bilu pioneers founded Gedera. Gedera was established on a tract of land purchased from the Arab village of Qatra by Yehiel Michel Pines of the Lovers of Zion through the auspices of the French consul in Jaffa.

Here's a L'Chaim to all the pioneers - past, present, and future!