For Three Weeks:  Sunday is the observance of the Fast of Shiva-Asar (17) b'Tammuz, the beginning of the Three Weeks leading up to the Fast of Tisha (9) b'Av,the saddest day in the Jewish year, a fast day that commemorates the destruction of the First and Second Temples, as well as other disasters that have befallen the Jewish people. 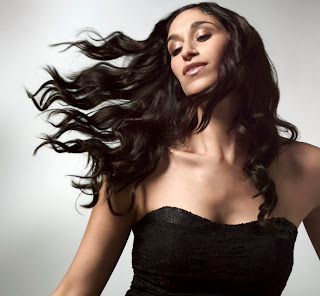 But today is Erev Shabbat, so Abq Jew firmly believes that we can - no, we must - laugh and sing. We'll get to the singing (with Sarah Aroeste) a bit later.

But first, a cartoon from this week's issue of The New Yorker.  Yes, this cartoon pokes fun at those who practice the ancient art of bagpiping.  Many believe, erroneously, that bagpipes are made from pigskin, rendering bagpipes and bagpiping treif and forbidden d'Oraita.

However, Wikipedia informs us that


Materials used for bags vary widely, but the most common are the skins of local animals such as goats, dogs, sheep, and cows. More recently, bags made of synthetic materials including Gore-Tex have become much more common.

Let's jump right over the mention of dogs: Bagpipes (and, many claim, accordions and banjos) must be forbidden d'Rabbanan. What's the difference?  Judaism 101 states


Halakhah [Jewish Law] comes from three sources: from the Torah, from laws instituted by the rabbis and from long-standing customs.

Halakhah from any of these sources can be referred to as a mitzvah (commandment; plural: mitzvot). The word "mitzvah" is also commonly used in a casual way to refer to any good deed.

Because of this imprecise usage, sophisticated halakhic discussions are careful to identify mitzvot as being mitzvot d'Oraita (an Aramaic word meaning "from the Torah") or mitzvot d'Rabbanan (Aramaic for "from the rabbis"). A mitzvah that arises from custom is referred to as a minhag. Mitzvot from all three of these sources are binding, though there are differences in the way they are applied ....

It is difficult for Abq Jew to believe that some people do not like the sound of the banjo. Yet, here we are, with another cartoon from this week's New Yorker.

And, to bring accordions into the mix, a cartoon from a previous issue: 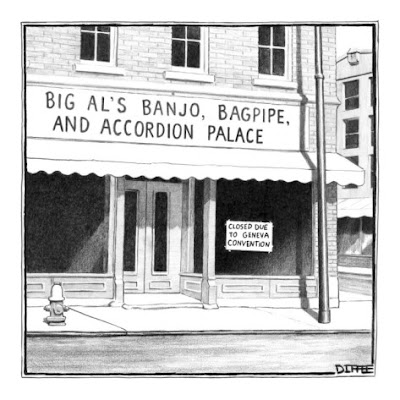 But now, back to Sarah Aroeste, one of the world's leading performers of Ladino music. The Forward recently published an article about Ms Aroeste and the new generation of Sephardi / Ladino performers, For Ladino Musicians, World’s A Stage: Artists Are Forging a Global Sephardi Culture.


Sarah Aroeste, inspired by her family's Sephardic roots in Greece and Macedonia, has spent the last 10 years bringing her contemporary style of original and traditional Ladino music to audiences around the world.

Aroeste writes and sings in Ladino, the Judeo-Spanish dialect that originated by Spanish Jews after their expulsion from Spain in 1492.  Those who left Spain, including Aroeste’s family, carried the medieval language with them to the various points where they later settled, primarily along the Mediterranean coast and North Africa. In time, Ladino came to absorb bits and pieces of languages all along the Mediterranean coast, including some Greek, Turkish, Portuguese, French, Italian, Hebrew, and more.

This exotic pan-Mediterranean language has, unfortunately, been fading away. But the continued musical legacy of Spanish Jews highlights the strength of an oral tradition that spans many centuries and crosses many geographic boundaries.

American born and trained in classical opera at Westminster Choir College and Yale University, Aroeste became drawn to her Sephardic musical past after spending a summer in 1997 performing at the Israel Vocal Arts Institute in Tel Aviv ....

Here she is, performing in Tel Aviv earlier this year.  Enjoy!

An original Ladino song
written and performed by Sarah Aroeste live in Tel Aviv, March 2012.
Inspired by a poem by 11th century poet Samuel Ha-Nagid,
the song is about holding out hope when you think all is gone.
As the chorus says: "Even if you feel like you're standing at death's door,
just remember- the wounded lion still knows how to roar."