The Next Jewish Pope

Mayor Bloomberg Considering Next Job: Every year, The Jewish Week [of New York] publishes a Purim Spoof, and this year (2013) is no exception. 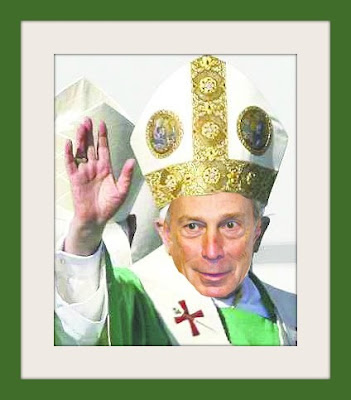 Except that Abq Jew forgot to visit TheJewishWeek.com before Purim, and only received the Purim issue in the mail last Thursday.

Therefore, in order to continue the Purim celebration, Abq Jew has launched

the four-week long celebration of which allows ... no, encourages ... no, requires Abq Jew to publish this article in its entirety:

Other surprise candidates in the running after Peres declines offer.

New York – With his second term at Gracie Burns Mansion coming to an end this year, Mayor Bloomberg is thinking seriously about becoming the spiritual leader of more than a billion Catholics.

“It’s one of the few jobs that interest me after leading New York these last many years,” Bloomberg confided to The Jewish Weak, “and I like the idea of people recognizing that I’m infallible.”

As for the fact that he is Jewish, Bloomberg said Vatican officials have not ruled out the idea of choosing him, depending on the size of his contribution to the annual worldwide Vatican fundraiser, popular among priests, called “Take-A-Child-To-Work Day.”

“They told me they like the idea of having the Church get back to its roots,” said Bloomberg, adding: “Don’t forget, their guy [Jesus] was Jewish, too.”

The Jewish Weak has learned that Bloomberg is not the only Jewish potential pontiff.

On hearing the news, Lieberman, who is currently starring in the Off-Broadway production of “Howdy Doody At 70,” said he was delighted to hear the news.

“After all the political sniping I have been victim to in the later years of my tenure as a Senator, I am really looking forward to just sitting back and getting my ring kissed.”

Some of the changes that the independent Senator has promised to bring about early in his tenure are:•  Repeal Catholic Church Doctrine known as “Don’t ask, don’t tell, until a Subpeona is served on your Diocese”• Change the Easter service from Latin to Hebrew or Yiddish, concluding with the age-old greeting to the Holy See: “Gut Yuntiff, Pontiff.”

But Jews are not the only possible successors to Benedict.

Some American Catholics are hoping Tim Tebow, the charismatic pro football player whose prayerful bended knee stance is universally known as “Tebowing,” will get the big call from Rome.

“True, he is Baptist,” Cardinal Timothy “Dunkin’” Dolan opined.“For now. But while he wasn’t able to convert to starting QB this year here, we think he’d do well converting to our team. After all, he’s a virgin and religious hero already, and no one’s better at throwing a ‘Hail Mary.’

A spokesman for the New York Jets, where the high-priced Tebow languished on the sidelines all season, said “a trade to Rome would be a godsend.”