Lessons from Nature: PBS recently presented a program called Animal Odd Couples. One of those odd couples was Kate (a Great Dane) and Pip (a baby fawn). 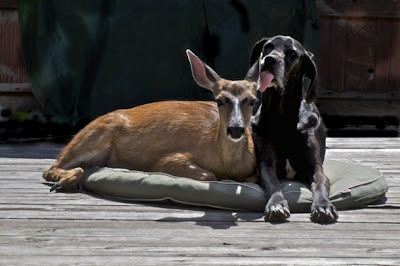 After being abandoned by her mother, a baby fawn, Pippin, was adopted by a Great Dane, Kate, and they have been best friends ever since. Kate’s owner Isobel Springett describes the uniqueness of their relationship: “When they greet each other, I’ve never seen anything like it. It’s not a deer greeting a deer. It’s not a dog greeting a dog. It’s definitely something that they have between the two of them.”

You can watch Kate and Pip play together here:

This week the Albuquerque Jewish community lost a dear friend,
Bob White. Bob is survived by Beverly, his wife of 53 years; lots of family; and many, many friends throughout the community. Graveside funeral services will be held on Sunday March 10 at 2:00 pm, at the Chavurat HaMidbar section of Fairview Memorial Park. Contributions may be made to Congregation B’nai Israel, Solomon Schechter Day School, Chavurat HaMidbar, or Congregation Albert. He will be greatly missed.

And in the spirit of true friendship - here is a news item from the New York Post that you (thankfully) don't see every day. It happened on Long Island, as if you didn't know.

There’s no pursuit of happiness for this Long Island man — local cops busted him for laughing too loudly in his own home.

Robert Schiavelli, 42, was recently slapped with two “absurd” summonses because his next-door neighbor complained that he could hear his hearty guffaws from across the driveway.

“I didn’t know it was a crime to laugh out a window,” said Schiavelli, who is considered disabled because he has frequent seizures and suffers from neurological impairments.

Schiavelli was chortling because he says his neighbor often taunts him due to his disability — and his best defense is to laugh him off.