Rabbi of Buchenwald Liberation: The smoke was still rising as Rabbi Herschel Schacter rode through the gates of Buchenwald.


It was April 11, 1945, and Gen. George S. Patton’s Third Army had liberated the concentration camp scarcely an hour before. Rabbi Schacter, who was attached to the Third Army’s VIII Corps, was the first Jewish chaplain to enter in its wake.

That morning, after learning that Patton’s forward tanks had arrived at the camp, Rabbi Schacter, who died in the Riverdale section of the Bronx on Thursday [March 21] at 95 after a career as one of the most prominent Modern Orthodox rabbis in the United States, commandeered a jeep and driver.

The Talmud teaches us that "whoever saves a life, it is considered as if he saved an entire world." Rabbi Schacter thus saved worlds upon worlds - including two very special worlds.


As he passed a mound of corpses, Rabbi Schacter spied a flicker of movement. Drawing closer, he saw a small boy, Prisoner 17030, hiding in terror behind the mound.

“I was afraid of him,” the child would recall long afterward in an interview with The New York Times. “I knew all the uniforms of SS and Gestapo and Wehrmacht, and all of a sudden, a new kind of uniform. I thought, ‘A new kind of enemy.’ ”

With tears streaming down his face, Rabbi Schacter picked the boy up. “What’s your name, my child?” he asked in Yiddish.

“How old are you?” the rabbi asked.

“Why do you think you’re older?” Rabbi Schacter asked, smiling.

“Because you cry and laugh like a child,” Lulek replied. “I haven’t laughed in a long time, and I don’t even cry anymore. So which one of us is older?”

Rabbi Schacter discovered nearly a thousand orphaned children in Buchenwald. He and a colleague, Rabbi Robert Marcus, helped arrange for their transport to France ... as well as to Switzerland, a group personally conveyed by Rabbi Schacter, and to Palestine.

One of the thousand orphaned children - transported to France - was Elie Wiesel. 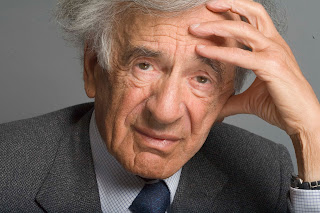 And what of Lulek ...? Lulek, who eventually settled in Palestine, grew up to be Rabbi Yisrael Meir Lau.

Rabbi Lau, who recounted his childhood exchange with Rabbi Schacter in a memoir, published in English in 2011 as “Out of the Depths,” was the Ashkenazi chief rabbi of Israel from 1993 to 2003 and is now the chief rabbi of Tel Aviv. 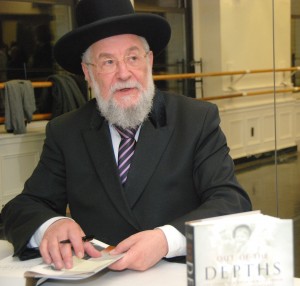 On Friday [March 22], when Rabbi Lau told Mr. Obama of his rescue by Rabbi Schacter - he thanked the American people for delivering Buchenwald survivors “not from slavery to freedom, but from death to life” - he had not yet learned of Rabbi Schacter’s death the day before.

“For me, he was alive,” Rabbi Lau said in an interview with The Times on Monday. “I speak about him with tears in my eyes.”

May the memory of
Rabbi Herschel Schacter
be for a blessing