The event will start with wine and hors d’oeuvres at 5:30 pm in the Social Hall of the synagogue, located at 4401 Indian School Road NE. Supper will be served at 6:30, followed by the concert at 8:00 in the sanctuary.

Maestro Figueroa, on the violin, will be accompanied by pianist Pamela Pyle and cellist James Holland. The evening’s program will feature Dimitri Shostakovich’s “Jewish Trio,” “one of the composer’s most famous pieces” according to Mr. Figueroa, which includes five or six melodies reminiscent of Jewish folk tunes. Another selection is John Williams’s “Suite from Schindler’s List.” 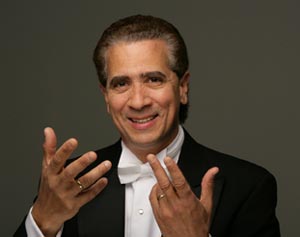 The Maestro is familiar to many music lovers in Albuquerque as Music Director and Conductor of the New Mexico Symphony from 2000 to 2010. He currently directs the Figueroa Music and Arts Project, which  brings both classical and popular music to audiences throughout the region,

Most recently, he garnered a Latin Grammy nomination for “Best Classical  Album” for his performance on the Naxos label CD “Cordero: Caribbean Concertos for Guitar and for Violin.”  Presented by the Latin Recoding Academy, the Latin Grammy is the industry’s most prestigious award.

Maestro Figueroa’s intense, passionate musicianship and elegant technique have brought him international recognition, and he has been guest conductor for the New York City Ballet and the Juilliard Orchestra. Maestro Figueroa will also intersperse his concert with reflections on his own Jewish roots and how Jewish folk tunes bear upon his musical selections for the evening.

The menu choices are prime rib roast beef, chicken in wine, or vegetables in puffed pastry - prepared under the direction of Chef Chris Buchalter. House-made potato knishes and a vegetable medley complete the menu selection. Fine wines will be served with the meal. A gala dessert reception featuring a celebratory cake will welcome guests on their return to the Social Hall for the dessert reception.

“An Evening with Maestro Guillermo Figueroa”  promises to be an unforgettable night of music, great food, and camaraderie. The Congregation’s annual “Big Event”  features an unbeatable raffle with the following three prizes:
The silent auction features first edition books, elegant  jewelry and gift items, fine dining, and works of art, including a large scale Arthur Sussman lithograph, signed and numbered by the late beloved Albuquerque artist.