On The Loss Of An Albuquerque Giant 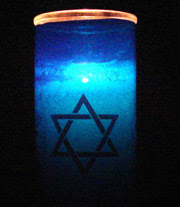 Rabbi Isaac Herbert Celnik. Age 71, a resident of Albuquerque since 1971, died Saturday, December 29, 2012. He is survived by his daughters, Cynthia Jill Celnik and husband, Chris Werner of Castle Rock, CO; Gitel Celnik; son Leib Celnik both of Louisville, CO; granddaughters Ava Werner and Lisa Streets; grandson Zachary Werner and Brad Streets; wife, Irene Sanchez of Albuquerque, NM; and a large, extended family. Rabbi Celnik was preceded in death by his daughter, Sherri Streets. He served as Congregation B'nai Israel's Rabbi for more than 30 years. Rabbi Celnik was a US Army Chaplain in the 1960's. Isaac was a visionary, pioneering efforts to bring many faiths together. Private family services took place at Santa Fe National Cemetery. Should friends desire, memorial contributions may be made to the Parkinson's Disease Foundation, www.pdf.org.

This past Shabbat (Parshat Shemot), Rabbi Arthur Flicker of Congregation B'nai Israel delivered this sermon, in memoriam to Rabbi Celnik.


One of the unique and wonderful aspects of our holy texts is the honesty with which they deal with the human condition. None of our Biblical heroes are perfect. Even our Patriarchs and Matriarchs are shown with all of their blemishes. Abraham will send Hagar and Ishmael into the desert with only bread and some water and offer his wife to neighboring kings. Isaac will show favoritism between his sons. Jacob will not only show favoritism between his sons, but also weakness when they take horrific actions after the rape of their sister.

The examples abound outside of Torah as well. Last week’s Haftarah showed the anger and spitefulness with which King David ended his life – and that spiteful spirit led him to end his life without the companionship of his family – other than Solomon.

The brutal honesty in our texts is unique to religious writings of the ancient world. Most ancient religions made their heroes out to be perfect humans, whose perfections were to be worshiped and emulated. Our Bible, on the other hand, shows our forefathers as far from perfect – making numerous errors through out their lives.

Our rabbis offer many explanations for this divergence from the traditions of the religions around us. One explanation is that these texts show us that God does not expect perfection. God knows that we are imperfect, and that as humans, we will make mistakes. In spite of these imperfections, God spoke to the heroes of our tradition and God offered them opportunities to repent from their errors.

Their examples and repentance serve as the example for us today. God doesn’t expect perfection. We will all make mistakes. Our job is to do our best and to learn from our texts and our own errors in trying to do better.

Unfortunately, although the examples are given to us in our Biblical texts, and although we have all seen examples of imperfections within ourselves and those around us, we don’t always learn from them.

This week, the Albuquerque Jewish Community lost one of its giants – Rabbi Isaac Celnik. Rabbi Celnik was a brilliant Jewish scholar. The graduate of an Orthodox Yeshiva, Rabbi Celnik went to the Jewish Theological Seminary where he earned honors in scholastics on his way to being ordained as a Conservative Rabbi. He served as a military Chaplain at Fort Bliss where he met his first wife, Linda. They decided to stay in the Southwest and he became the Rabbi of B’nai Israel just after the congregation moved to our facilities here on Indian School.

During our 90th year, some of the old timers shared stories and memories of the history of our congregation. One of the shared stories was the struggle the congregation had in finding and keeping a rabbi that was a good match with our community. Rabbi Celnik proved to be that match and provided stability and leadership for nearly 30 years.

Rabbi Celnik taught with great energy and scholarship. He was there for our congregants for simchas and for tragedies. He forged partnerships with his colleagues at Congregation Albert – Rabbis Shore, Citrin and Black. He was among the clergy that founded and nurtured the Catholic/Jewish Dialogue, which continues to flourish and bless our community today. He helped negotiate the partnerships and compromises which helped bring about our Solomon Schechter Day School.

Tragically, Rabbi Celnik was struck with a most insidious disease, Parkinson’s.

It ravaged his body, but not his mind. However, even more tragically, that mind seemed unable to remember the lessons in our holy texts. For many reasons, right and wrong, both Rabbi Celnik and many congregants felt resentful and betrayed. Many times, I, other rabbis, and many friends tried to reach out to Rabbi Celnik and help him see that, just like the imperfect heroes in our texts, he needed to find new ways to partner with his community and his God. But Rabbi Celnik refused.

His actions taught me an important lesson. This summer, when I went to Cincinnati for [my son] Aaron’s graduation, I attended services at the congregation that had not renewed my contract after nine years in which we had achieved a new building and tremendous growth. I realized that I shouldn’t continue to carry an anger that served no purpose other than to cause pain.

Our Torah and our other holy texts show our heroes and forefathers exactly as they were – warts and all. It is a reminder that we are all imperfect – rabbis, congregants, synagogue presidents. We can only do our best. Sometimes even those best efforts cause pain. But, we have to understand the imperfections from which the pain may come and recognize that only through coming together, working together, forgiving together, can we go on with peace within our community and, more importantly, within ourselves.

And to all of us I say, may we learn from the errors of our Biblical heroes. And may we learn from the positive and negative examples in Rabbi Celnik’s life and our own – to love, cherish and study Torah; and to remember to understand the frailties and errors in ourselves and those around us; to be accepting of those errors; and to learn and grow from them, without harboring the anger and hatred that can debilitate our lives. In that way, making a better, happier and more loving life for each of us and all of us.