Old Roller Skates:  Thanks, Debo Orlofsky, for reminding Abq Jew - yet again - of just how old he is.  Debo (the celebrated accordionist of The Rebbe's Orkestra, famed percussionist of Saudade, and renowned Empowerment Through Music Coordinator of the New Mexico Jazz Workshop) recently posted this picture on Facebook: 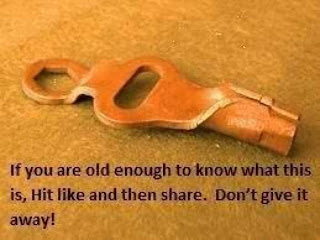 Just how old is Abq Jew?  He's so old that he knows exactly what this is.  Not to give it away ... well, yes, to give it away - the picture above goes with the drawing below: 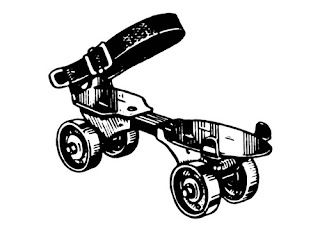 Some of you may still be having trouble with this.  So let Abq Jew explain: this is one of a pair of roller skates.  One used to put roller skates on over one's regular shoes (one skate per shoe); the skates were then tightened (so they didn't fall off) through use of a skate key, which is the object portrayed in Debo's photo.

All of this took place in the years just before photography was invented.

Debo, working with the Archaeological Society of New Mexico (Abq Jew just made that up) was able to recover that old skate key and photograph it.  No old roller skates have ever been recovered, however, which is why Abq Jew had to use the above drawing (artist's conception).

In case you need reminding, here is what roller skates look like now: 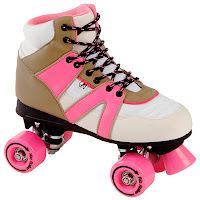 One can see the resemblance in form and function to the roller skates of the ancients, although accurate information about when pink was introduced is missing from the historical record.

And speaking of historical records - Abq Jew is on a roll now! - here is Brand New Key, the famous song by Melanie, of whom, Abq Jew suspects, many of you have never heard.


Caution: This song was considered highly risque in its time!

Melanie Anne Safka-Schekeryk (born February 3, 1947) ... an American singer-songwriter. Known professionally as simply Melanie, she is best known for her hits Brand New Key, Ruby Tuesday, What Have They Done To My Song Ma , and Lay Down (Candles in the Rain).

Melanie was born and grew up in the Astoria neighborhood of Queens, New York City, New York. Melanie made her first public singing appearance at age four on the radio show Live Like A Millionaire, performing the song Gimme a Little Kiss. She attended Red Bank High School in Red Bank, New Jersey, graduating in 1966. After school, her parents insisted she go to college, so she studied acting at the American Academy of Dramatic Arts in New York, where she began singing in the folk clubs of Greenwich Village and signed her first recording contract.

Astoria?  Red Bank High School?  Parents insisted she go to college?  Do we need further proof?  OK, how about this:  Melanie Safka is listed on the Bellevue Holiday Rentals List of Famous Jews, right between Mel Brooks (who we all know) and Mike D'Abo, former lead singer of Manfred Mann who sang on their hit The Mighty Quinn.