Captivating in Motion:  Back in February, Abq Jew presented Circus of Pain, a stunning video by Gergedan accompanying the song by Albuquerque's own Zoltan Orkestar.


And there's Gergedan (Turkish for rhinoceros), a creative entity of unknown origin, derivation, or any form of address that seems to have produced a series of artistically stunning music videos.

Do you know Gergedan?  Inquiring minds (and minds like Abq Jew's) want to know! In the meantime, visit GergedanFilKedi's YouTube channel! 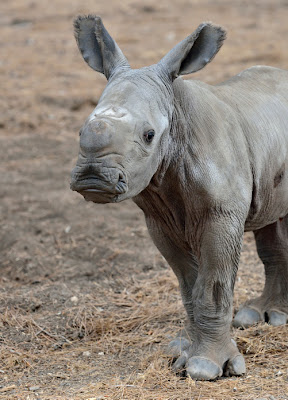 And speaking of rhinoceroses ... rhinoceri ... let's go with rhinos - here is a photo of Terkel, Israel's newest baby rhino.

The Jewish entertainment blog 6 Degrees No Bacon reports that

After an 18-month pregnancy, Tanda, a 20-year-old white rhino, gave birth to Terkel, a rare white rhino calf, at the Ramat Gan Safari near Tel Aviv.

Terkel is named after zoologist Dr. Amelia Terkel, who is retiring after 30 years at the Ramat Gan Safari. His mother Tanda, who was born in South Africa, gave birth to his older brother Tibor four and a half years ago.

Since February, Abq Jew has learned absolutely nothing about Gergedan. But his inquiring mind still wants to know. To again pique (that's a French word, meaning ... well, never mind) your interest - here is another Gergedan video.

The music is by the French group Tend'm, about whom Abq Jew also knows absolutely nothing. So - just watch & listen & watch: Indifference.