The celebration did, indeed, take place as scheduled at the Albuquerque JCC.  Abq Jew was honored to be among the dozens in attendance.

Vanessa Paloma and Consuelo Luz performed, exquisitely, to open and close the occasion. And in between - there were (ahem) a few speeches.

Among those speaking - a Who's Who of Crypto-Judaic Studies - were Dr Seth Kunin, Dr Seth Ward, and Dr Roger L Martinez.

Abq Jew is pleased to present Dr Hordes' remarks at this wonderful event celebrating his achievements.

I can’t imagine any greater tribute than that offered by one’s peers.
I am truly honored by the very kind words expressed by my friends and colleagues this afternoon.

I am particularly appreciative of the pains that so many of you took to travel here from so far away to be here to honor my work.   I also know that events like this don’t just happen.  They take a huge amount of time and thought to organize and execute, and I would like to express my profound appreciation to Ron Duncan Hart, Program Chair, and Dorothy Amsden, President of the NMJHS, for their extraordinary efforts to put this program together.

The great Jewish philosopher, Alan Koenigsberg (aka Woody Allen) once said, “Eighty percent of success is showing up.”  Well, so much of my career has been shaped by just “showing up” at the right place at the right time – and taking advantage of the many opportunities with which circumstances provided me.

I happened to grow up in the suburbs of Washington, DC, and when it was time to go to college, there was no question as to where to attend – it was “the university down the street,” or nowhere at all.   So, I enrolled at the University of Maryland, which happened to have an outstanding history department.  And the colonial Latin American historian, Professor J. Benedict Warren, just happened to have studied at the University of New Mexico under the direction of the pioneering Inquisition scholar, France V. Scholes.

And Ben Warren, having stimulated my interest in the relationship between the Inquisition and the crypto-Jews of Mexico, recommended that I pursue graduate study under Professor Scholes at UNM, I “showed up” at UNM in 1971 to do precisely that.

And it just so happened that Professor Scholes had been deemed “too old” to take on graduate students, and then a few months later it so happened that another of Professor Scholes’ students, Richard E. Greenleaf (THE leading historian of the Mexican Inquisition), was in Albuquerque visiting Professor Scholes at the same time I happened to be over there, and he encouraged me to continue my Ph.D. work at Tulane University, which I did.  And, under the guidance (and financial support) of Professor Greenleaf, I completed my doctoral dissertation in 1980 on the history of the crypto-Jews of Mexico in the 17th century.

And, “showing up” in New Mexico shortly thereafter, there happened to be a vacancy up in Santa Fe for the position of New Mexico State Historian, which I applied for and received.  And, Santa Fe being a small town, many people whose roots went back some 400 years wondered who this newcomer was, who was going to be the historian of their state.

And it just so happened that, having learned about the work that I had just done on the history of the crypto-Jews of Mexico, some people from within the Hispano community felt compelled to come into my office and whisper to me about their family, friends or neighbors lighting candles on Friday night.  Well, you all know where the story went from there.  The importance of “showing up” at the right place at the right time. 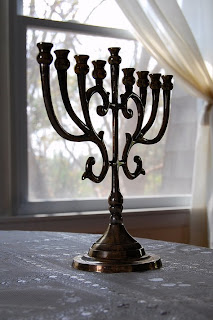 My debts of gratitude are immense.   First, to my parents and my brother, who instilled in me a love of history.  To my father, who told me when I was about 15, that by the time I was an adult there would be so many people speaking Spanish in this country, and that I should be prepared to communicate with them.  So, like a dutiful son, I started taking classes in high-school Spanish.  And, when you learn a language, you gain an appreciation for a culture, and so my father’s wise advice led me to combine my love of history with my growing appreciation for Hispanic culture.

To my mentor, Professor Richard Greenleaf, who just passed away this past November, for his wisdom, wit, encouragement, and support – financial, as well as intellectual – I owe him so much.

To my dedicated research associates who helped me immensely on both the New Mexico book and the forthcoming work on the history of crypto-Jewish settlement of the Spanish Caribbean Islands – Richard Salazar, Rob Martínez, Janice Martínez, Martina Will, Margarita Ochoa, Frank Álvarez, Mercedes López Wooten, and Gerald González, whose untimely death in November saddens us all.

To my colleagues – too many to mention all of them here – Seth Kunin, Seth Ward, Roger Martínez, Tomas Atencio, Rowena Rivera, José Antonio Esquibel, Janet Jacobs, David Gitliitz, Kristine Bordenave, Orlando Romero, Adrian Bustamante, Fay Blake, Michael Perko – just to name a few – whose work has stimulated me, and whose advice kept me from ill-conceived leaps of faith.

To the descendants of crypto-Jews – to Isabelle Medina Sandoval, Michael Atlas Acuña, Dennis Durán, Glorya Tschabold, and so many others – for the inspiration that they have shown on their voyages of discovery of their rich heritage.

And even to my critics – they know who they are – who motivated me to question assumptions, and to exercise more care in developing my own conclusions.

To my friends and fellow board members in the New Mexico Jewish Historical Society and the Society for Crypto-Judaic Studies, for their tremendous efforts to promote and encourage the study of Jewish history in all of its complexity.

And most importantly to my family: to Helen who supported my career from the beginning, who worked to put me through grad school, who coped with my weeks-long absences, and who supported me during some difficult times.

To my wonderful children, Shira and Paul, and their even more-wonderful spouses, Yoav and Melissa, for their love and encouragement, and for enduring the unceasing and annoying history lectures during family drives through the countryside, and to my absolutely wonderful granddaughter, Cora (as well to the two new grandbabies to arrive later this year), for teaching me about the truly important things of life.