Hang Up The Phone

This Is Jewish Music; or Not:  Lipa Schmeltzer is a 34-year-old Skverer Chasid from New Square, New York, who has made a career as a singer at weddings and concerts. His CDs, DVDs, and YouTube videos have been big hits in Haredi circles. 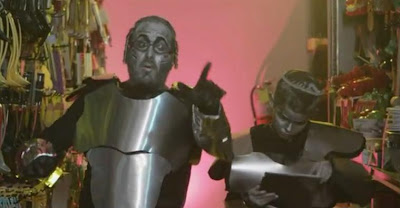 Abq Jew cheerfully admits that he has lost touch with the Haredi music scene, especially since relocating to the Land of Enchantment. But Jewish Humor Central reports that Lipa Schmeltzer has recently


released a new music video called Hang up the Phone, in which he plays a robot (with a stubbly beard and peyot) among other robots who come to life in a Boro Park electronics store after the store closes for the night. The song is commentary on our ever growing infatuation with gadgets - equal parts science fiction and practical advice for today's technologically obsessed society.


Schmeltzer, the biggest act in the Hasidic world, is a long way from crossing over into mainstream pop, as this video can attest. But the production values are almost there, kind of. It’s like a late-90s boy band video with absolutely no girls in it, and really befuddling silver make-up.

You, lucky readers, can view Hang Up The Phone right here!

Abq Jew must point out that not all of Lipa's reviews - especially on YouTube - have been favorable. While many reviewers praise Lipa's talent and creativity, others accuse Lipa of following hukas hagoyim - doing what the nations do. Among traditional Jews, this is not a good thing.

In this 935-page volume, Jeremy Kalmonofsky, in a masterful essay on Interfaith Relations, quotes a midrash from Eichah Rabbah:


How does this statement guide us in our view of Jewish music? What can we learn from the nations? And - what exactly is Jewish music, anyway?

This definition includes Leonard Bernstein, Paul Simon, and Neil Sedaka in the category, along with all members of the Nahalat Shalom Community Klezmer Band. The musical idioms of their day influence(d) the music of all of these artists; everyone has shared. And yet ... it's still Jewish!

Vote for Abq Jew in the Social Madness Challenge!
http://www.bizjournals.com/albuquerque/exclusives/socialmadness