No Snowflake in an Avalanche

Book Signing for Mikey Weinstein's New Book:  No Snowflake in an Avalanche goes deep inside the world of religious extremism in America s military and political infrastructure from the perspective of Michael L. "Mikey" Weinstein.


Mr Weinstein will be speaking and signing books at the 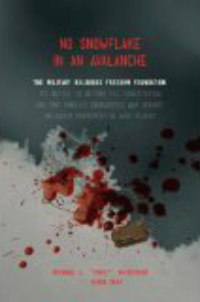 Mikey Weinstein is an attorney, businessman, and former Air Force officer. He was formerly a White House counsel in the Reagan Administration and General Counsel to two-time Presidential candidate and Texas billionaire H. Ross Perot and Perot Systems Corporation.

He is founder and president of the four-time Nobel Peace Prize-nominated Military Religious Freedom Foundation (MRFF) and author of With God on Our Side: One Man s War Against an Evangelical Coup in America s Military, in which he describes his fight against well documented, coercive Christian Fundamentalism practices by some members of our United States military.

Come out on Tuesday and support Free Speech, Separation of Church and State - you know, the U.S. Constitution!  Which is not to mention the Right to Purchase Books!

Vote for Abq Jew in the Social Madness Challenge!