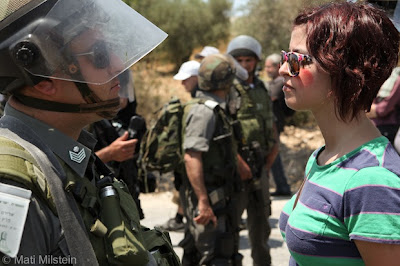 
This is the photographic documentation of a new generation of radical Palestinian activists who stand out from their society in the most distinct way: they are women.

These activists are on the front lines of West Bank protest, they are beaten and face arrest and sexual harassment for their bold role.

Starting with the March 15 Palestinian unity rallies in the West Bank, I [Mati Milstein] began to photograph the increasingly central role played by Palestinian women activists.

Most of these women are in their teens and 20s, they hold key organizational positions and lead protests against Israeli (and sometimes Palestinian) security forces, standing on the lines – in front of their male counterparts – and bearing the brunt of soldiers' blows. The women seek to both shake off Israeli occupation and to demand sexual equality and unity in their highly-fragmented and often chauvinist society.

In an interview for the web magazine +972, Milstein explains how he became involved in this project.


I was in downtown Ramallah on March 15, 2011, photographing Palestinian demonstrations calling for unity between disparate political factions. I noticed that many of the protest leaders were, in fact, women. Though I did take note of this unusual fact, it initially remained filed somewhere in the back of my head. As the following weeks passed and I continued to photograph Palestinian protests in the West Bank, I realized I was seeing the same women – week after week – that I had seen at that protest in Ramallah.

I began talking to them, trying to get a grasp of this new and unusual image (at least new and unusual to me) of women leading men in Palestinian street protests. Eventually described by the international media as the “March 15th” group, these women (together with their male colleagues) were a very loose coalition of like-minded individuals, non-violent in their strategy and totally independent in their political affiliations. In parallel with photographing their political actions, I also sat and listened to them, attempting to educate myself and understand their approach and objectives: eliminating the Israeli occupation, confronting the totalitarian nature of the Palestinian Authority, altering their own place as women in a patriarchal Middle Eastern society.

I was intrigued and quite soon realized that this was something unique in our region that I wanted to document. 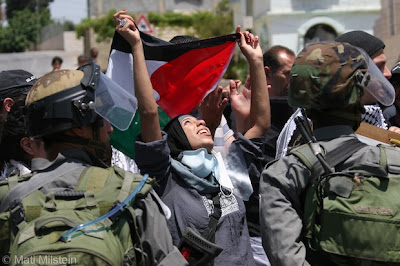 Milstein emphasizes that this is an exhibition of his art.


I have chosen to photograph a subject that is clearly political in nature. But this is an art exhibition. I leave it up to the women to make their own political statements. I am creating art. My intention was to capture and present visual images that cause people to stop and think and, hopefully, reconsider the manner in which they view their world. I want my photographs to shake things up.

Abq Jew finds the images that Milstein presents to be visually stunning yet difficult to look at. Is there a political message here? Yes, but there is also a very human message.