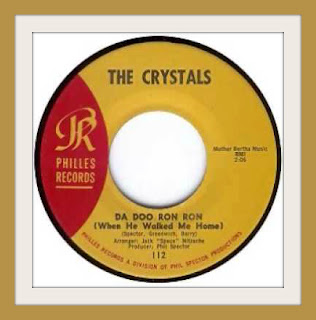 So - on his way home from the Sunport, Abq Jew started thinking about how hard it is for folks to learn Hebrew. How, at first, everything seems like nonsense syllables.

And then Abq Jew heard this song on Sirius XM.  Or maybe he heard the song first, and then started thinking about the learning Hebrew problem.

Or maybe Abq Jew didn't even think of the learning Hebrew problem until he thought he needed some Jewish connection to post Da Doo Ron Ron on this blog.

Da Do Ron Ron, Wikipedia tells us, is


a 1963 hit single by The Crystals, produced by Phil Spector in his Wall of Sound style. The song was written by Jeff Barry, Ellie Greenwich and Spector. The drummer was Hal Blaine.

That's gold. That's solid gold coming out of that speaker.
— Spector to Sonny Bono, after listening to the final playback

When things slow down this afternoon, as the temperature rises, Abq Jew strongly encourages you to listen to this.  As one YouTube commenter commented:


Wow - like electricity running up and down my spine.  You just cannot hear this without your pulse going up to about 160 and your body can't help but move.

Enjoy!  Da Doo Ron Ron is Jewish music!
And it's a great tune for Adon Olam ....