Songs of Love and Social Consciousness 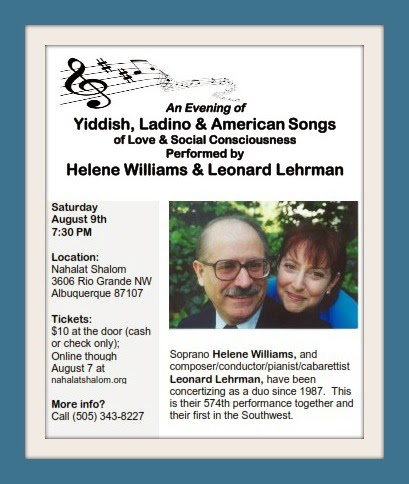 Soprano Helene Williams and composer / conductor / pianist / cabaretist Leonard Lehrman have been concertizing as a duo since 1987. This is their 574th performance together and their first in the Southwest.

Helene is the co-founder of the Bronx Opera Company, and has been called "a splendid talent with distinctive allure," recalling Imogene Coca, Julie Andrews and Martha Schlamme.

Leonard was the first Jewish conductor of the musical “Fiddler on the Roof” in Berlin, and founded the Jewish Music Theater in that city as well as the Metropolitan Philharmonic Chorus, which he still conducts in the New York area.

Lehrman and Williams have performed all across the U.S., Canada, Israel, Australia and seven European tours.

They presented the first Yiddish song concert ever in Bayreuth, Germany (under the auspices of the Wagner Festival), and were invited back to do a classical music recital where they performed settings of poet Heinrich Heine in six languages — English, French, German, Russian, Italian and Hebrew.